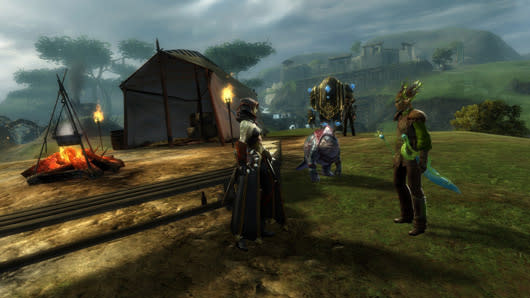 ArenaNet announced that it will not institute a subscription model or introduce free-to-play elements when its MMORPG Guild Wars 2 launches in China this year, subverting the region's dominant time-based, pay-to-play trends for online games.

Guild Wars 2 will launch in China as a one-time purchase supported by frequent free updates, maintaining the same business model supporting the game since its launch in 2012. The upcoming Chinese version, which ArenaNet will produce in a publishing partnership with KongZhong Corporation, will see timely updates that mirror content additions in North America and Europe.

The Chinese version of Guild Wars 2 will enter a two-week closed beta test on March 11.

When Guild Wars 2 enters the China game market, the game will keep the same innovative business model as the West, where players pay to purchase the persistent MMO game once and can continue playing and enjoy consistent releases of new content free of charge. KongZhong's approach is revolutionary for the China PC game market, where the free-to-play and time-based pay-to-play business models are most prevalent.

"Chinese players will get the same premium MMO gaming experience that Guild Wars 2 players in North America and Europe enjoy, with consistent and timely content updates", said Mike O'Brien, president and co-founder of ArenaNet. "Guild Wars 2 China will be synchronised with the worldwide version of the game".

These updates include Guild Wars 2's frequent releases of living world content that adds new game play and story. That means game content will largely remain the same for all players, with the exception of some adjustments to the new-player tutorial that are designed for and requested specifically by Chinese players.

For the closed beta test starting on 11th March, Guild Wars 2 China will welcome qualified players to a two week beta trial. Players can experience the game and provide valuable feedback on game features and quality before it becomes publicly available.

Late last year, ArenaNet announced that Guild Wars 2 had sold more than 3 million units in just its first nine months in North America and Europe. The figure made it the fastest selling Western MMO of all time, based on data provided by DFC Intelligence. At the time, David Cole, head of DFC Intelligence, said, "After triangulating against multiple data sources, it's clear that Guild Wars 2 is the fastest-selling Western MMO of all time based on the first nine months of availability. This puts Guild Wars 2 in an impressive position when they release in China, where we've seen similar franchises really take off."

China is the first region in Asia where Guild Wars 2 is launching.

Guild Wars 2 is a visually stunning MMO that offers players the epic grandeur of a massive role playing environment combined with innovative combat mechanics, dynamic events, and customised personal storytelling. Building on the success of Guild Wars, NCSOFT and game developer ArenaNet have created an MMO that lets gamers play the way they want, while at the same time retaining the no-subscription-fee business model that made the original Guild Wars so popular.

KongZhong (KONG), listed in NASDAQ in 2004, is one of the leading providers of digital entertainment services for consumers in the PRC. We operate three main business units, namely WVAS, mobile games and Internet games. Within Internet games, KONG has the exclusive publishing rights for World of Tanks, World of Warplanes, World of Warships, Guild Wars 2 and other titles in mainland China. Since the acquisition of our proprietary smartphone game engine platform in 2011, KONG has expanded our smartphone game development team across 4 cities in China currently developing over 10 smartphone games across various genres, including MMORPG, RTS, military, and fantasy.
In this article: arenanet, Guild-Wars-2, kongzhong-corporation, mmo, mmorpg, ncsoft, pc
All products recommended by Engadget are selected by our editorial team, independent of our parent company. Some of our stories include affiliate links. If you buy something through one of these links, we may earn an affiliate commission.