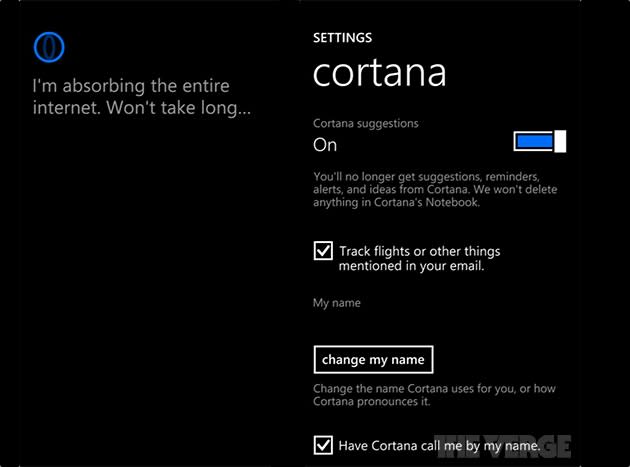 We already know that Microsoft is set to become the last major player to launch a digital assistant, but previews of what "Cortana" will look like have been almost non-existent. Now, thanks to leaked screenshots from The Verge, we're getting our first look at what to expect when the company's Siri rival makes its public debut with the launch of Windows Phone 8.1. Confirming earlier reports, Microsoft has opted for a circular animated icon as its primary UI element, which will use the same highlight color you've chosen on your Windows Phone device. That icon will reportedly jump about the screen as it asks you questions and responds to your requests.

Cortana can also be tweaked to personalize greetings, allowing you to change your name or set a nickname for when it provides alerts, offers suggestions or displays reminders. Microsoft appears to be taking a few pages out of Apple's and Google's playbooks, which is further evidenced by the inclusion of a setting that will index your emails in order to track flights and other services -- just like Google Now. It's not clear whether Microsoft will add more services to its assistant before Windows Phone 8.1 makes its way to devices, or if it will even stick with the Cortana codename, but we may only have to wait a month until we find out for sure.

In this article: assistant, build2014, cortana, google now, microsoft, mobilepostcross, siri
All products recommended by Engadget are selected by our editorial team, independent of our parent company. Some of our stories include affiliate links. If you buy something through one of these links, we may earn an affiliate commission.