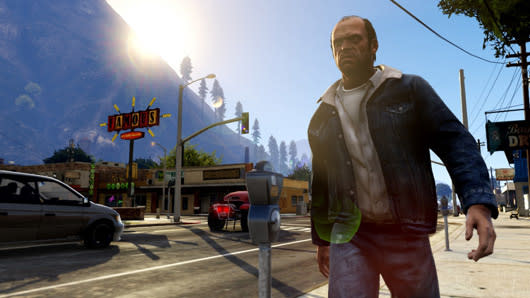 If the seven games debuting on PSN this month at discounted rates don't spice up Sony's Spring Fever sale enough for your liking, the sale will also include sales on four different franchises. Games and DLC in the Call of Duty, Need for Speed, BioShock and Grand Theft Auto series are on sale at varying points in March for all PSN users.

Rockstar's Grand Theft Auto series rolls in next on March 18 with sales lasting through March 24. The sale knocks GTA 5 down to $39.99, GTA 4 to $5.99 ($4.79 on PS Plus) as well as a handful of other PS3 and PSP games in the series ranging from $5.99 each ($4.79 for PS Plus) to $2.99 each ($2.39 on PS Plus). Lastly, the first two games in the BioShock series will also be $9.99 ($5 for PS Plus members) March 25 through March 31. Those games are joined by BioShock Infinite's Burial at Sea Episode 1 DLC for $10.40 ($7.34 on PS Plus) as well as Columbia's Finest Pack and Clash in the Clouds for $3.49 each ($2.44 on PS Plus).
[Image: Rockstar Games]
In this article: bioshock, bioshock-2, bioshock-infinite, call-of-duty-4, call-of-duty-black-ops, Call-of-Duty-Black-Ops-2, call-of-duty-modern-warfare-2, call-of-duty-modern-warfare-3, DLC, grand-theft-auto-5, grand-theft-auto-iv, GTA, gta-iv, gta5, Need-for-Speed, Need-for-Speed-Hot-Pursuit, need-for-speed-most-wanted-2012, playstation, playstation-vita, ps3, PSN, psp, sale, sony, spring-fever, spring-fever-2014, vita
All products recommended by Engadget are selected by our editorial team, independent of our parent company. Some of our stories include affiliate links. If you buy something through one of these links, we may earn an affiliate commission.