Experience dysentery on an Arduino-powered 'Gameboy' 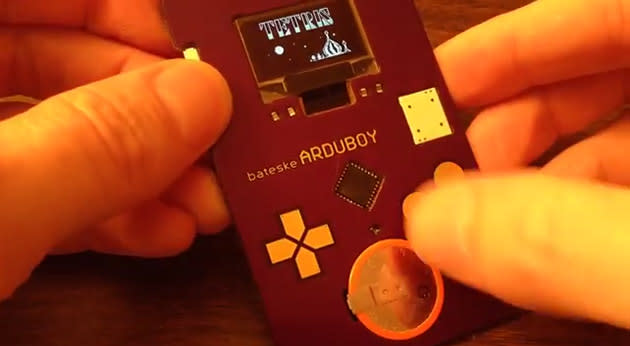 Off-white business cards with Silian Rail lettering are so passé -- these days; it's all about creativity. This Game Boy look-alike, for instance, demonstrates its creator's skills in one fell swoop: It doesn't just display a résumé, it's also a simple gaming handheld that can play Tetris. The device was made by Oregon programmer Kevin Bates, who calls it the Arduboy, because it uses a barebones Arduino board (the tiny computer also found inside Kegbot and Fish on Wheels) connected to an OLED screen. To make the hand-held gaming experience as authentic as possible, he also equipped the card with capacitive touch buttons, a speaker and a replaceable battery that lasts up to nine hours.

Thanks to all the feedback he's received since demonstrating the card on YouTube, Bates is now planning to launch a Kickstarter project in the coming weeks, specifically for DIY enthusiasts. He aims to sell Arduboy kits for at least $30 per card and promises to make assembly as beginner-friendly as possible through video instructions. Not exactly fond of Tetris? Don't worry, Bates is also developing another version that runs Pokemon.

In this article: arduboy, arduino, businesscard, BusinessCards, diy, gameboy, kickstarter, tetris
All products recommended by Engadget are selected by our editorial team, independent of our parent company. Some of our stories include affiliate links. If you buy something through one of these links, we may earn an affiliate commission.