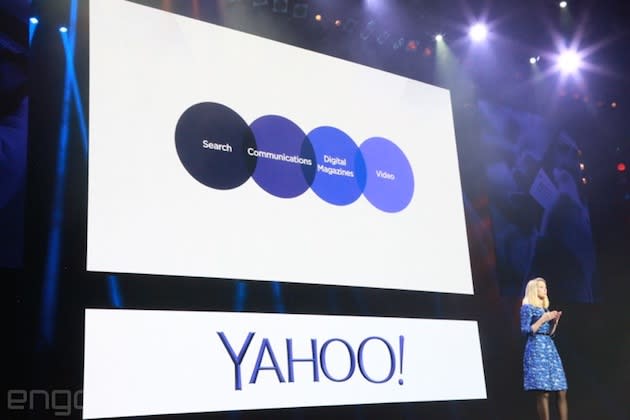 Marissa Mayer's been in full-on spending mode since taking over the reins at Yahoo. As such, we're not surprised to find out that the company has made yet another acquisition: Vizify. Yahoo's new purchase, a startup based in Portland, Ore., focuses on turning social data into interactive media. Most recently, Vizify's tech could be found powering Twitter tool #FollowMe, which mashes up pics, tweets and Vines to make a short highlight reel for users. The idea being that, at a glance, other people could see what they would gain by following you on the microblogging network.

Naturally, with social sites like Tumblr and Qwiki already a part of Yahoo, it's easy to see why there was interest in Vizify -- and chances are Mayer isn't quite done yet. Neither outfit disclosed financial terms of the acquisition, but Vizify did send out an email to its users about what to expect going forward, which you can find after the break.

As part of our transition to Yahoo, we will no longer be allowing new signups or purchases of paid plans. We will also be sunsetting the Vizify service.

What does this mean for me?

As an existing Vizify account holder, look for an email in the coming weeks with more details. But for now, to make the transition process easier on you, we're taking a few extra steps:

For all bioholders, free and paid, we'll be providing a way for you to opt-in to "archive" a snapshot of your current bio that will remain live at the same URL through September 4, 2014.
For those of you with a current paid plan, we'll be issuing a full refund for everything you've paid Vizify.
For Premium customers who registered a domain through Vizify (like your-name.com), we'll be providing instructions so you can assume ownership of your domain, free of charge.

What do I need to do?

You'll be getting an additional email from us next week with steps you'll need to take. In the meantime, see our FAQ.

In this article: acquisition, Marissa Mayer, MarissaMayer, social, social network, SocialNetwork, Vizify, Yahoo
All products recommended by Engadget are selected by our editorial team, independent of our parent company. Some of our stories include affiliate links. If you buy something through one of these links, we may earn an affiliate commission.