Black and white home theater has no need for vividness 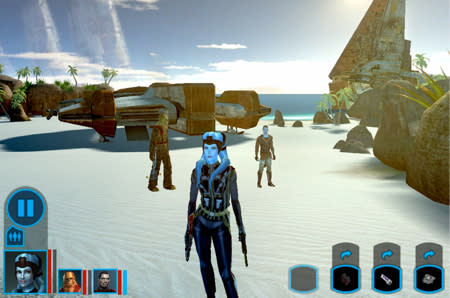 Yesterday, the fantastic iOS port of Knights of the Old Republic received full MFi controller support and cloud save functionality that lets you transfer progress from one device to another (like when you upgrade your iPad, for example). Combine those features with the revamped HD visuals and a few other tweaks the game has received since its iOS debut, and the iPad is now the premiere platform on which to experience one of the greatest western RPGs ever.

The iPad, in all of its current incarnations, is a powerful tool for productivity, but what's becoming more and more apparent is that it's the perfect platform for yesterday's PC games to receive a second life. It's a big risk for a developer to put the resources into reviving a classic game, but there are a few sure bets out there that would undoubtedly thrive on the App Store. It's a little bit absurd that this classic hasn't already been reborn on the iPad, especially given the soft spot many adult gamers have for this Tim Schafer epic. 3D models on top of static backgrounds might prove a little tricky to bump up into a Retina-friendly resolution, but the game was already pretty sharp looking and I don't think anyone would complain about a straight port. Give it to us now! Syndicate -- and its sequel, Syndicate Wars -- are still pointed to as inspiration for modern cyberpunk-themed games, and the isometric perspective of the original PC titles would be a perfect fit for the iPad. Controlling a team of mechanically enhanced assassins as you swipe and pan around a cityscape would be made much easier with the help of the iPad's touchscreen, and the modest weapon effects and other visual touches would be no problem for even the still-in-production iPad 2. Theme Hospital has all the makings of a great iOS game: It's relatively easy to learn, deep enough that it can keep you busy for hours, and it's absolutely absurd. At its heart, it's a sim-style management game, but the hilarious patients and fast and frantic pace of the entire experience would be great on a tablet. Yes, a new Deus Ex spinoff recently launched on the App Store, and that game's solid controls and console-quality action just proves how easy it would be to port the original title to Apple's tablet. Everything from the hacking to inventory management would be made easier and more fun with the use of a touchscreen, and as KOTOR shows us, upping the resolution of these basic 3D models looks just fine on a Retina display. One of the most beloved "god games" of all time, Black & White on the iPad would finally let you touch your creations the way the game had always intended. In the PC version of the game your on-screen hand was responsible for manipulating various aspects of the game world, so a tablet version would translate wonderfully. You could cast lighting down onto your subjects from the heavens with a flick or discipline your "pet" with a tap on its head. Please make this happen.

In this article: black white, deus ex, grim fandango, kotor, syndicate wars, theme hospital
All products recommended by Engadget are selected by our editorial team, independent of our parent company. Some of our stories include affiliate links. If you buy something through one of these links, we may earn an affiliate commission.
Share
Tweet
Share