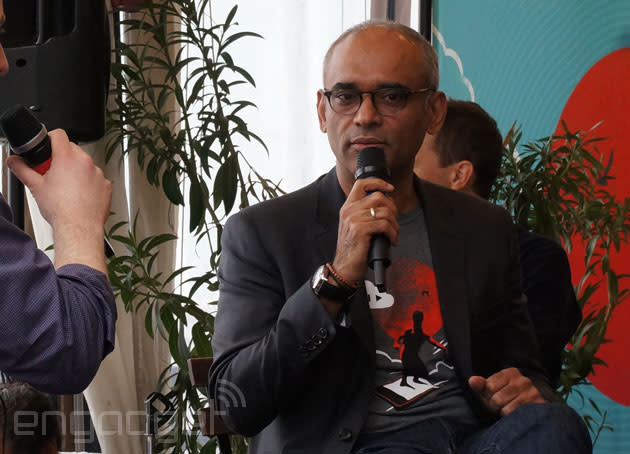 It's a bittersweet day in Austin, Texas, for Aereo. The company's remote DVR service, which allows users to stream or record over-the-air broadcasts, just launched in the city this week against the backdrop of SXSW, making it Aereo's fourth market in the state. But there's a storm cloud hanging over this celebration; a recent legal hiccup with the state of Utah that saw it shut down service in Denver, Colo., and Salt Lake City, Utah. Aereo, however, is no stranger to this courtroom drama. The company's been engaged in a copyright battle with broadcasters that'll either cement it as a content licensee (along the lines of a Netflix), and potentially cripple its business growth, or as a provider of cloud DVR storage. It's a fight Aereo's waging all the way to the Supreme Court and has so far been winning, except for today.

The timing, then, for an intimate chat with Aereo CEO Chet Kanojia here at SXSW couldn't be better. Kanojia kicked things off by immediately addressing the service disruption in Utah and Colorado saying, "That's why it's raining." All joking aside, Kanojia's aware the Supreme Court's decision could have grave consequences for Aereo's future, but shrugged off concerns of a possible legal defeat. "I haven't thought about it, " he told us. "I don't focus on it." That could just be willful denial on Kanojia's part, but his company does have other pressing concerns to focus on, like continued market expansion and back-end service improvements.

Legal issues haven't been the only blemishes on Aereo's record.

Aereo's currently halfway through its phase one rollout, a plan that should eventually see the service become available in 22 markets in total. But the company's approach to expansion has changed. Kanojia explained that, initially, Aereo sought out key markets by "looking at [the] demographic mix in general ... the ones with the youngest digital population and access to broadband." Now, however, the company's growth is largely centered on the number of people that've pre-registered for the service.

Legal issues haven't been the only blemishes on Aereo's record. The recent Oscars telecast was an embarrassing black eye for the company, as a portion of subscribers that attempted to tune in live were met with a service error and those with recordings were treated to abbreviated playback. "It was a pure tech fault on our part," Kanojia said, pinpointing the failure on a "system crash in the first three minutes [of the show]." He's aware the company can't afford to weather more incidents like this and, as a result, has chosen to prioritize changes on the back end to ensure consistent service quality over the introduction of additional social-minded functionality. To that end, two updates to Aereo's app will be released in the coming weeks -- one this month and another in mid-April -- to address these scaling issues.

Don't expect the Aereo app to hit next-gen gaming consoles like the PlayStation 4 or Xbox One anytime soon. Kanojia's team is spread a bit too thin at the moment to service those platforms, though he didn't rule them out either, telling us development is just "not there yet." Instead, the company's going to focus on bringing its app to the growing stable of smart TVs.

Why would I ever want to sell something that is extremely valuable?

And then there's the question of Chromecast support. Kanojia's already publicly stated that a compatible app for Google's dongle was in development, but it's been some time since that announcement. Good news is on the way, though, as Kanojia told us that a Chromecast app should be released "in the next couple of weeks."

Aereo's upcoming Supreme Court battle hasn't put a damper on speculation that the company could be acquired. Rumors have even singled out cable titan Time Warner as a possible suitor. But Kanojia maintains that he's not interested in selling. "We'll do what's the best thing. If ... the Supreme Court says your core functionality is above reproach ... that you're legal, then it's an extremely valuable company. Why would I ever want to sell something that is extremely valuable?" It's hard to argue with that line of reasoning, but Kanojia's also not outright dismissing the possibility. He told us that if Aereo ever found itself unable to "deal with the bigger forces on a standalone basis," the company would seek out a partner to help it take on the industry's Goliaths.

That's the worst-case scenario for Aereo, though. As Kanojia told us quite plainly, his team's current goal is simply to grow Aereo as big as possible while still maintaining its independence. "We didn't start this to sell. I hope I never have to sell."

In this article: Aereo, chet kanojia, ChetKanojia, hdpostcross, SXSW, SXSW2014
All products recommended by Engadget are selected by our editorial team, independent of our parent company. Some of our stories include affiliate links. If you buy something through one of these links, we may earn an affiliate commission.