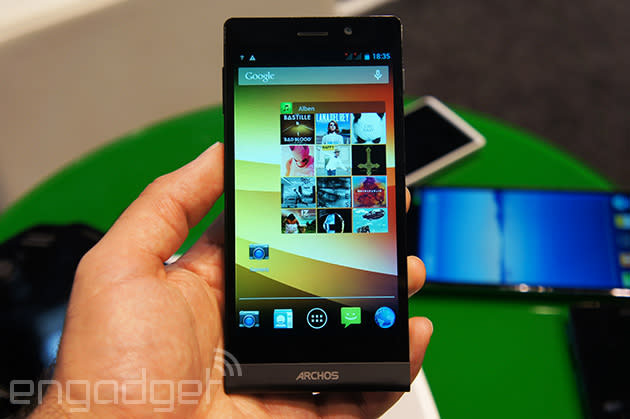 When it comes to smartphones, hugs and all-you-can-eat buffets, more is better, right? That's why we had to sit down and play with Archos' 50c Oxygen. The gassy, Jelly Bean-running handset is one of the first to use MediaTek's 1.7GHz octa-core MT6592 CPU, housed behind a 5-inch 1,280 x 720 IPS LCD display. Archos has found room for dual-SIM slots, 1GB RAM, 8GB of onboard storage and a microSD card slot, while the 2,000mAh battery should last you at least a day. Aside from the thinness of the device, some of the design cues, like the light-up strip for the menu buttons, reminded us a little of Sony's old Xperia handsets, which we always had a soft spot for. Being a budget device, alas, there's no LTE modem, and instead users will be forced to suck down data on HSPA+. Of course, the star here is the CPU, and while we weren't able to put this device through the normal barrage of benchmarks that we use in our reviews, a casual run-through revealed that it was a lot more responsive than other devices that we've seen at this price. The 50c Oxygen will launch in April, around the same time as its phablet-sized brother, priced at €230 ($320).

Sharif Sakr swore off the all-you-can-eat buffet during this report.

In this article: 2014, 50c, 50c Oxygen, Archos, CeBIT2014, hands-on, mediatek, MT6592
All products recommended by Engadget are selected by our editorial team, independent of our parent company. Some of our stories include affiliate links. If you buy something through one of these links, we may earn an affiliate commission.