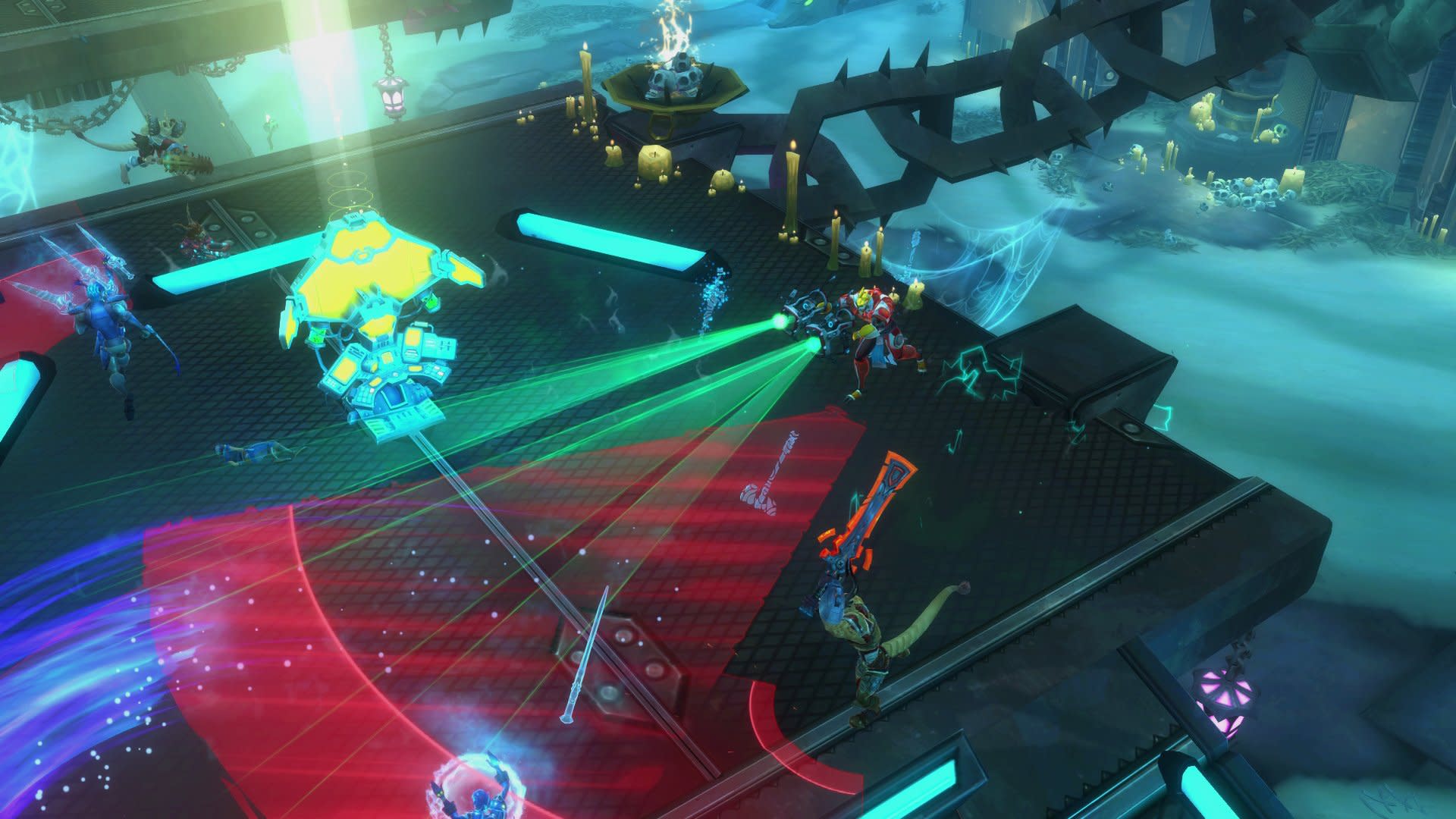 PvE is a staple of MMORPG gameplay, but if you prefer the challenge and adrenaline rush of fighting against another human being while bashing on a keyboard and circle-strafing to dizzying effect, then you, my friend, are a PvPer. And if you've PvPed in other games, you'll be familiar with WildStar's battlegrounds and arenas. But warplots? What's a warplot? That's just one of the PvP-related questions I asked at a press event last week at Carbine Studios with the WildStar team.

Battlegrounds Designer Kevin Lee and Lead PvP Designer Jen Gordy explained to me that PvP is one of the key focuses of the game; all PvP content in WildStar will be on a cross-realm queue. Your level and gear stats will be normalized to provide an equal playing field. WildStar's telegraph system ensures that PvP is extremely reactive, which is typical, but what's not typical is being able to see where your enemy is aiming that AoE or conal attack.

I learned that there are three types of PvP players can participate in (other than open-world PvP on a server with that ruleset). The three types are meant to cater to different playstyles and as such have varying degrees of difficulty and loot rewards. Battlegrounds are meant to be fun and competitive but a bit more relaxed than the other two. Arenas ratchet up the competitiveness by having both rated and open modes. And warplots are meant to be PvP raid encounters consisting of 40 people per side. Yep: 40!

You can start queueing up for the Walatiki Temple battleground once you hit level 6. I asked whether a player can level all the way to endgame in PvP, to which Gordy emphatically replied, "Yes!" I also wondered whether that meant PvP-only players would fall behind the economy curve since PvP in many MMOs fails to provide much in the way of cash rewards and gear acquisition. Gordy assured us that the team is looking at optimizing all aspects of the system to ensure it's a truly viable option for progression, which suggests that PvP isn't something that's just being tacked onto the game.

Specifically, Gordy mentioned that the game will reward PvPers with gear and weapons at various intervals as they level up and acquire Prestige, the currency we earn by being in range of an enemy kill. Landing the killing blow will offer a slight bonus to Prestige earned, but aside from that, everyone in range will earn equal amounts of Prestige whether he's dealing damage, healing, tanking, or crowd controlling. You also earn Prestige by completing objectives like capturing masks in Walatiki Temple, for example. Once you reach level 50, you're not normalized by level (since everyone's 50); instead, you'll be matched by gear score. You can start queueing for Arenas at level 30, but only for open arenas. At level 50, you're able to also queue for rated arenas. Arenas come in three flavors: 2v2, 3v3, and 5v5. You can have three players on a 2v2 team, five players on a 3v3 team, and nine players on a 5v5 team (confused yet?). You are matched against other teams based on your Elo rating, which WildStar has adopted for PvP. These types of matches allow a limited number of respawns, which makes them more strategic (for example, players are forced to focus-down certain high-priority targets). When warplots were first explained to me, the words "defensive RTS" sprang to mind, but after seeing them in action and getting to play them, I think it's more complicated than that -- think of it as a PvP raid with MOBA elements. Warplots are level 50 content that will require 40 people on each side. These 40 people can be one guild, one alliance, several groups banded together, and so forth. Each side is called a war party. If a war party doesn't have the required 40, it can supplement with mercenaries, solo players who queue in to fill in gaps, though a war party can hold more than 40 people to accommodate backups and overflow. The leader on each side can assign permissions and ranks to allow members to control and accomplish various tasks. Even better, you're not restricted to straight-up Exile vs. Dominion matchups; you can even fight your own faction, Exile vs. Exile and Dominion vs. Dominion.

As the war party leader, you start off by setting up your warplot and adding members to your war party, all while offline (not queued up). Once you're done with the setup process, then you queue into a warplot. Your warplot is, in essence, your home base, but with a twist. Each warplot consists of seven plugs, just like the plugs in the housing system that let you build your home territory. In warplots, you can add everything from a horde of locusts to a mean-looking piranha to a passive buff. It's all completely customizable, modifiable, and upgradeable; in fact, you can upgrade each plug up to three times, though the upgrades are only match-specific. After sustaining damage, the plugs can be repaired in-match or while you're offline. Each base plug has several variants, so there's a total of roughly 120 different plugs to choose from.

Competitive players need to know that there are two win scenarios in warplots. One is the destruction of all of your enemy's generators. The second is the whittling down of your enemy's energy pool to zero. Each plug you install drains energy from your warplot, so the longer the match lasts, the more of your own energy is being drained. The different plugs drain energy at different rates depending on size, and there's no match timer, so energy pool reduction functions as a "soft" match timer. War parties will have ratings as they win or lose matches in order to provide fair match-making, and they'll also earn currency, called war coins, every match; these are used to purchase plugs and other upgrades like boss tokens.

What are boss tokens? They allow you to place as one of your plugs a raid boss, which can either sit back and defend your warplot or head out into the enemy's ranks to demolish the opposition. These bosses possess the full skillset of the bosses they're representing. At launch, there will be three purchasable boss tokens, but they will also drop (rarely) from boss mobs within the game, and those tokens will be tradeable on the auction house and buyable even if you aren't into PvP.

One luxury WildStar won't have is a spectator mode, although Gordy mentioned that the team is working on Twitch integration.

Massively's not big on scored reviews -- what use are those to ever-changing MMOs? That's why we bring you first impressions, previews, hands-on experiences, and even follow-up impressions for nearly every game we stumble across. First impressions count for a lot, but games evolve, so why shouldn't our opinions?
In this article: arenas, battlegrounds, beta, beta-test, beta-testing, carbine, carbine-studios, featured, hands-on, interview, interviews, jen-gordy, kevin-lee, ncsoft, press-event, preview, previews, pvp, sandpark, sci-fantasy, sci-fi, testing, warplots, wildstar, ws
All products recommended by Engadget are selected by our editorial team, independent of our parent company. Some of our stories include affiliate links. If you buy something through one of these links, we may earn an affiliate commission.