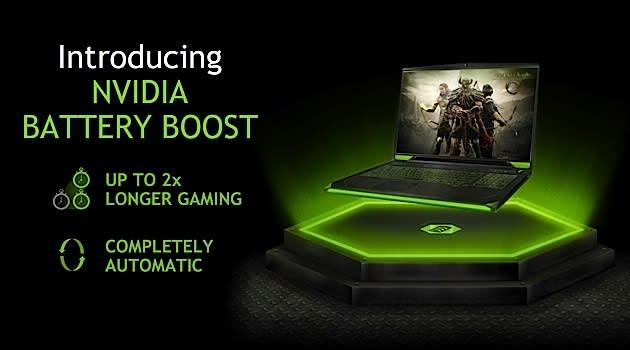 Thanks to the appearance of a curiously thin MSI gaming laptop at CeBIT a few days ago, we had an inkling that NVIDIA's new batch of laptop GPUs were inbound. Indeed, the 800M series has just become official, with a number of features geared toward portability and battery life. For a start, the lower half of the stack -- the 830M, 840M, 850M and 860M -- has been endowed with the company's latest Maxwell architecture, which allows gaming credentials to be claimed by thinner and lighter machines. The new Gigabyte P74 is a decent example: It contains an 860M inside a 21mm-thick chassis and we managed to play BioShock Infinite on it, running at 1080p and max settings with a frame rate above 40 fps -- that's a level of performance that NVIDIA says would have required a 55mm-thick laptop three years ago. The other big promise with this generation concerns battery life, and it comes courtesy of a setting called "Battery Boost." The Battery Boost setting won't affect general-purpose stamina, but instead only springs into action when you load up a game. It lets you set a target frame rate, such as 30fps, and then it dials down the performance of the system whenever possible in order to meet that target, so you don't waste power on frames that you can live without (at least while you're traveling away from a mains socket). Based on some testing by Tom's Hardware, NVIDIA says the average duration of battery-powered gaming on a current GeForce laptop is less than 50 minutes, but Battery Boost should be able to increase that by 50-100 percent in a relatively easy-to-run game like Borderlands 2.

Finally, NVIDIA is also bringing some desktop features across to its laptop range of GPUs for the first time. These include Shadowplay, which lets you record 1080p footage (as h.264 video) of your gaming exploits for broadcast on sites like Twitch and UPlay. Then there's Gamestream, which lets you play games on your laptop remotely using an NVIDIA Shield handheld.

In this article: 800m, cebit2014, gaming, geforce, gpu, graphics, laptop, maxwell, nvidia
All products recommended by Engadget are selected by our editorial team, independent of our parent company. Some of our stories include affiliate links. If you buy something through one of these links, we may earn an affiliate commission.