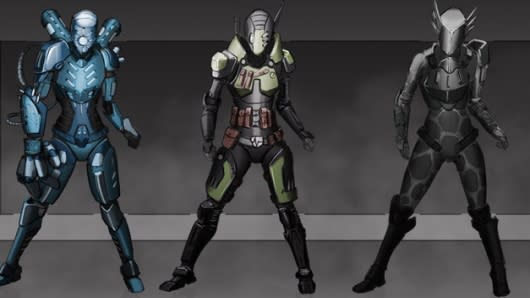 You could build the best superhero game in the world, but if your only options for costuming consist of a gray jumpsuit people are going to be disappointed. Superheroes need elaborate costumes, armors, nifty gadgets, and hopefully jumpsuits in shades other than gray. The development team working on City of Titans knows that, which is why the most recent development update focuses chiefly on the concept art from old artists and new.

Among the pieces on display is a design for one of the game's villains, several armor and costume designs, and several hairstyle options. Sure, it's not an update on all of the possible game mechanics that might be in the game, but don't you want to look at some of the keen potential art? If so, go ahead and check out the latest update on the game's Kickstarter page.

[Thanks to Nonsensicles for the tip!]
In this article: art, city-of-heroes, city-of-titans, coh, concept-art, cot, crowdfunding, indie, kickstarter, missing-worlds, missing-worlds-media, news, news-items, official-art, preview, superhero, superheroes
All products recommended by Engadget are selected by our editorial team, independent of our parent company. Some of our stories include affiliate links. If you buy something through one of these links, we may earn an affiliate commission.