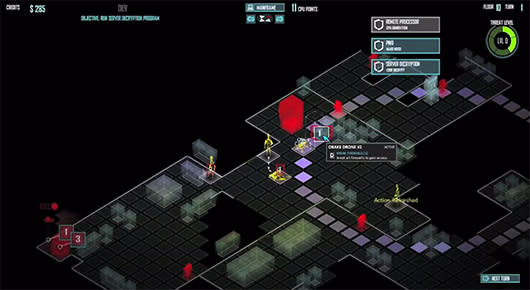 Klei Entertainment's turn-based espionage game Invisible, Inc remains in alpha testing, but to whet players' appetites, the developer has cobbled together the above trailer to demonstrate the additions found in the game's latest update.

Highlights of the update include a new 360-degree field of vision for agents, stronger guards and the addition of "augments." These special upgrades enhance an agent's abilities beyond normal human levels, but each occupies a permanent space in a player's augment cache, forcing tough decisions about which skills are most crucial for a virtual spy. On the other hand, this update also adds a tutorial to Invisible, Inc, which should make the spy game a bit less confusing.

Full details on the update can be found on the Klei forums. Or, if you're totally sold on Invisible, Inc, you can join the game's ongoing alpha test by forking over $20. For that money, you'll be granted alpha access, the game's soundtrack and two copies of the final version of Invisible, Inc.
[Image: Klei Entertainment]
In this article: espionage, incognita, invisible-inc, klei-entertainment, pc, spies, stealth, turn-based, update
All products recommended by Engadget are selected by our editorial team, independent of our parent company. Some of our stories include affiliate links. If you buy something through one of these links, we may earn an affiliate commission.