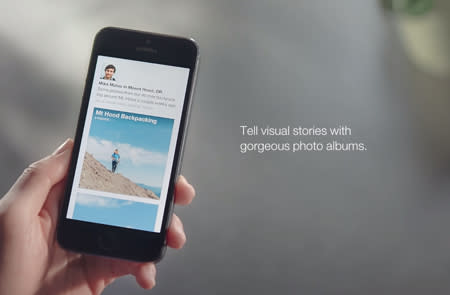 When Facebook introduced Paper for iPhone early last month, the app quickly skyrocketed to the top of the App Store social network charts because, well, it was from Facebook. But beyond that, the enticing preview video that showcases what Paper is supposed to be about made the app feel extremely promising.

Lots and lots of people downloaded the app on day one (and day two and day three), but it has since fallen off in popularity pretty quickly. It's still in the top 50 of social networking apps, but it's completely fallen out of the top overall charts, where it doesn't even rank in the top 500. That's not good news for a free app that's just over a month old.

So what's the problem?

Aside from the well documented fact that new social apps have an extremely hard time gaining traction in the post-Twitter, post-Facebook landscape, the app itself is a bit of an unfulfilled promise.

Going by the video demo that appears on Facebook's web portal for Paper, you'd expect to log into the new app and see gorgeous photos paired with well-told stories, but the actual results depend on your own Facebook contacts. The truth is, most of us don't go backpacking on Mt. Hood or spend our free time creating professional-quality dioramas which we then document with perfect photos.

Facebook is presenting Paper as a companion to the traditional Facebook experience -- one where the most touching, important, or otherwise click-worthy posts are presented in a special way. But the app itself acts more like a replacement of the Facebook app entirely, allowing just about anything on your news feed to populate an area supposedly made to showcase "stories."

Instead of seeing story-quality content when you boot up the app, you see the exact same things you'd see on the regular Facebook app: two-word status updates, a funny photo taken from a random website, and a complaint about a local fast food restaurant that once again forgot an item in someone's order. These are not life events worth celebrating in full-screen glory.

Paper needs a better way of filtering out the garbage that we all would ignore anyway in favor of personal experiences that actually matter. As it stands now, the app is too dumb to tell the difference between a photo collection of my nephew's first birthday party (which has dozens of comments and likes) and a picture someone took of their burrito (which has zero interaction whatsoever).

I'm not sure how that can be accomplished, or if it would be as simple as giving posts with more likes and/or comments a higher priority in the Paper queue, but it might be a good place to start.

The idea of Paper is still a good one, and there are definitely stories on just about everyone's social network feed that deserve to be highlighted in a more direct way. It's not like Poke -- an idea that was half-baked from the start -- but it Paper still needs a good deal of work before social network users on the whole will consider it a valuable asset.

In this article: apps, facebook, facebook paper, facebook poke, paper, social, social networking
All products recommended by Engadget are selected by our editorial team, independent of our parent company. Some of our stories include affiliate links. If you buy something through one of these links, we may earn an affiliate commission.
Share
Tweet
Share