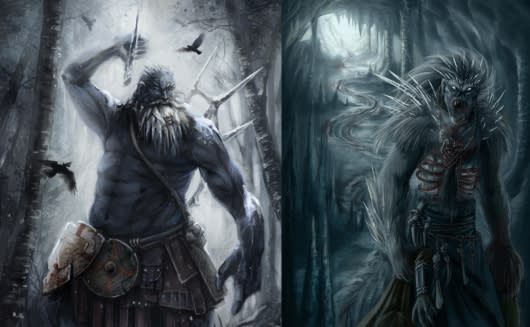 A new producer's letter from Camelot Unchained's Tyler Rockwell is out today with a first look at one of the giant races of the game. The game posted a piece of concept art for its Viking Jotnar as well as an image of a creature found in The Depths dungeon.

Rockwell said that the team has a lot to do over the next month, including integrating a new game designer into the team, developing the Tuatha giant race, and vastly improving the internal testing client so that large-scale battles can happen. The game's scheduled to get Havok physics and collisions added in, allowing for jumping and projectiles to be included in the future.

[Update: Tipster Matthew let us know that CU also uploaded a new developer video. It's after the cut!]

In this article: camelot, camelot-unchained, city-state, city-state-entertainment, cse, giants, havok, havok-physics, mark-jacobs, producers-letter, pvp, rvr, the-depths, Tyler-Rockwell, viking, viking-jotnar
All products recommended by Engadget are selected by our editorial team, independent of our parent company. Some of our stories include affiliate links. If you buy something through one of these links, we may earn an affiliate commission.