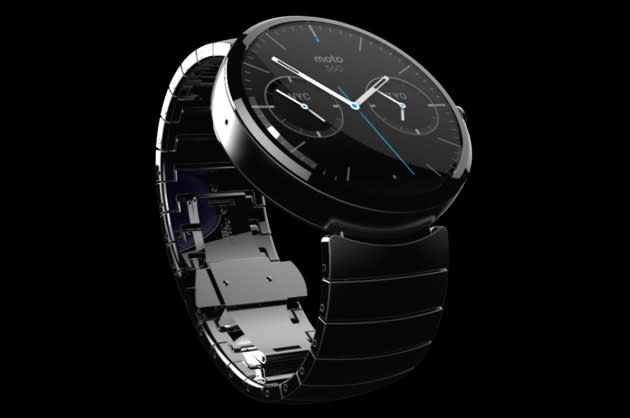 In a live broadcast, designer Jim Wicks showed off a working version of the Moto 360 smartwatch and offered up a few pieces of information about his prized product and the philosophy behind its design. When asked about the inspiration for the 360's circular design, Wicks mentioned that the shape is an iconic one that people naturally associate with time, as evidenced by the fact that nearly 80 percent of all watches sold globally are circular. "We don't want to make consumers change for this tech," Wicks said. "We want to make this tech map to them. With a square concept you might say 'that's interesting,' but you don't hit that 'Whoa!' mark. We wanted to hit that Whoa! mark." Wicks understands that when it comes to smartwatches, fashion triumphs over functionality -- and with the Moto 360, he believes that it passes the crucial test of being fashionable enough that consumers will want to buy it.

Of course, this isn't Motorola's first go at a watch. The Moto ACTV taught the company quite a few lessons, one of which was power management. "Our system design for ACTV is what allowed us to run it with a very small battery; and what we invented there went into the Moto X (with Active Display, touchless control and sensor integration). And a lot of the stuff you saw in the Moto X...ended up going into this watch." While he couldn't speak about battery life estimates, he specified that power management is a high priority for Motorola.

Wicks also believes that the Moto 360 will appeal to men and women alike. "We're going after mass appeal by making design decisions around round," he said. He claims that there are plenty of women who are now buying larger-faced watches, and having a customizable wristband will certainly help make it a good fit for as many people as possible: "From a comfort perspective, we're allowing ourselves to get maximum reach, from small wrists all the way to large wrists."

In addition to its circular design and the use of Google's new smartwatch platform called Android Wear, we also learned that the 360 will feature interchangeable straps, water resistance and a special way of charging the device without USB, although Motorola isn't ready to disclose any details on what that entails just yet. It'll also be compatible with Android devices running 4.3 Jelly Bean or higher. Moto confirmed that the watch lacks a camera, a fact that likely won't come as a disappointment to most potential buyers. Unfortunately, at the moment it also lacks a price, firm release date and word on availability, although the company indicated that it wants to eventually distribute it globally (which we take as a sign that it'll probably be limited to the US or North America at first). Head below for the full interview.

In this article: androidwear, design, google, jimwicks, mobilepostcross, moto, moto360, motorola, smartwatch, video
All products recommended by Engadget are selected by our editorial team, independent of our parent company. Some of our stories include affiliate links. If you buy something through one of these links, we may earn an affiliate commission.