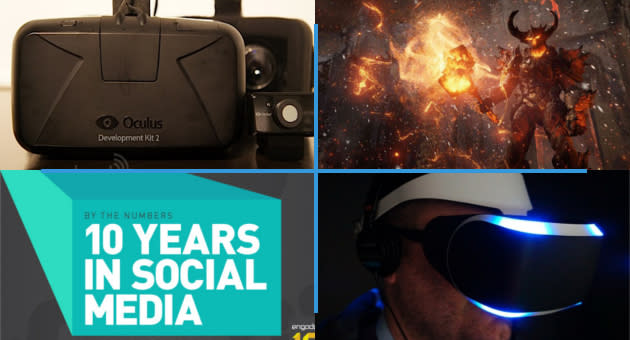 Last night at GDC, Sony unveiled Project Morpheus. We got to try out the company's VR headset, destined for the PlayStation 4 -- and yes, it's pretty awesome. Engadget's own Ben Gilbert donned a virtual sword and took the prototype for a spin while we caught the action on camera. Oculus VR's Rift headset is at the forefront of virtual reality, and is undoubtedly gaming's "next big thing." Starting today, the company's second development kit is now available for pre-order. At $350, it brings several improvements over the previous "Crystal Cove" prototype, including a camera and 1,080 x 960 display. Fans of Gears of War and Mass Effect know firsthand of Unreal Engine 3's gaming prowess. And today, Epic Games hopes to take its platform to the next level by releasing Unreal Engine 4 on a subscription-based model. For $19 a month, developers get access to the Unreal Editor and the complete source code hosted by GitHub. 10 YEARS OF SOCIAL MEDIA'S BIGGEST PLAYERS AND PAYOUTS, BY THE NUMBERS

One decade is a long while, especially in the ever-changing tech industry. Since 2010, companies, startups and public figures have invested a tremendous sum in their bid for social media dominance. Read on for our illustration of the biggest developments and players from the last ten years of Facebook, Twitter and the like.

In this article: blackberry cyclone, epic games, gdc, gdc2014, oculus rift, oppo find 7, project morpheus, socia, social media, sony, tdr, unreal engine, unreal engine 2, virtual reality, vr
All products recommended by Engadget are selected by our editorial team, independent of our parent company. Some of our stories include affiliate links. If you buy something through one of these links, we may earn an affiliate commission.