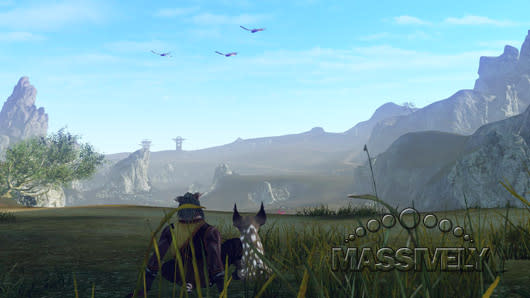 Can I share how nervous I am about the fact that ArcheAge is finally heading West? Thanks because I really need someone to talk to about this stuff.

I'm going to skip over the F2P hand-wringing, both because I covered it nine months ago and because there's nothing anyone can do about it. And there's plenty of reason to fret about the rest of what's in store for starving western sandbox fans, anyway. Join me after the cut and we'll worry about it together. I can't say with any authority how important ArcheAge is to Trion. I suspect that it's everything to XLGAMES, though, which may account for the misteps in the Korean release that purportedly contributed to the Russian AA fan migration.

What I can say with authority is that ArcheAge is mentioned outside of its native Korea only because of its sandbox features. These are features that the western market lacks aside from Ultima Online and a couple of gestating indie sandboxes with similar leanings. None of these titles boasts ArcheAge's incredible production values, though, and given the modern MMO audience and its disdain for non-linear gameplay, it's easy to imagine ArcheAge being the last gasp at a triple-A virtual world for the foreseeable future.

And no, I haven't forgotten about EQNext. I even spent a hundred bucks in support of what it represents. But it's far too theoretical to be mentioned alongside ArcheAge right now. Massively announced ArcheAge to western gamers nearly four years ago, and we gave it a large amount of coverage toward the tail end of 2010 and throughout 2011, even though we had no inkling of when or if it would come to America.

We gave it a large amount of coverage because there was literally no other MMO like it in terms of gameplay options, non-combat mechanics, etc. Sadly there still isn't, which may be tempting Trion to think of ArcheAge as a western hit in the making. It won't be, though, and I really hope the firm realizes what audience both wants and appreciates this sort of game. I posted this is in a comment the other week, but it's worth repeating here: Name me an MMO aside from ArcheAge that boasts substantial systems for crafting, gardening, housing, player castles, decorating, hang-gliding, fishing, trading, airships, boats of all shapes and sizes, underwater combat, underwater exploration, submarines, dolphin-riding, car racing, treasure hunting, pets, and dozens of other features including traditional PvE questing and PvP, all married to a seamless open world.

If Trion, whether at XL's behest or of its own volition, decides to remove, water down, or otherwise meddle with these features during its westernization process, ArcheAge will tank in the west.

Without them, and probably even with dumbed down versions of them, the game is yet another fantasy MMO aimed at the World of Warcraft crowd and relegated to also-ran status before it even launches.

And let's be completely clear: ArcheAge has a lot of baggage that will keep it firmly in the niche category. Aside from the fact that most western players don't like sandboxes, many western players also don't like Korean MMOs and their pop-candy aesthetic that routinely mixes fantasy, sci-fi, steampunk, and cutesy tropes with open PvP and grindy progression.

The one thing that makes me hopeful about the translation is that Trion's higher-ups have been around this industry a long time. And surely they have a) played ArcheAge to a high level and b) realized that, barring major game-gutting changes, ArcheAge is unequivocally a niche MMO in today's market.

Perhaps XL bet its financial farm on the game; I don't rightly know. I do know that the game has been in development since 2006, it changed engines mid-stream (CryEngine 2 to 3), and it is extremely pretty and highly polished despite being a huge, instance-free world. All of that happens only after big expenditures, of course. So, Trion. And XL, too, assuming either of you is listening. Please do everyone a favor and realize what you've got. What you've got is an MMO that could and probably should be the heir apparent to UO and Star Wars Galaxies. What you don't have is a title that will sell to a wide audience regardless of how you market it. Let me repeat that for emphasis.

ArcheAge is not a mainstream MMO.

It isn't capable of catering to everyone as designed, which is OK because MMOs need not be all-inclusive to be profitable over the long term. The sooner everyone accepts that, the sooner ArcheAge can go about realizing its full gameplay potential and building a loyal audience that will support it for decades.

Everyone has opinions, and The Soapbox is how we indulge ours. Join the Massively writers as we take turns atop our very own soapbox to deliver unfettered editorials a bit outside our normal purviews (and not necessarily shared across the staff). Think we're spot on -- or out of our minds? Let us know in the comments!
In this article: aa, arche-age, archeage, archeage-rant, archeage-trion, editorial, fantasy, featured, op-ed, opinion, pvp, rant, rants, sandbox, sandpark, soapbox, soapbox-jef-reahard, the-soapbox, trion, trion-worlds, xl-games, xlgames
All products recommended by Engadget are selected by our editorial team, independent of our parent company. Some of our stories include affiliate links. If you buy something through one of these links, we may earn an affiliate commission.