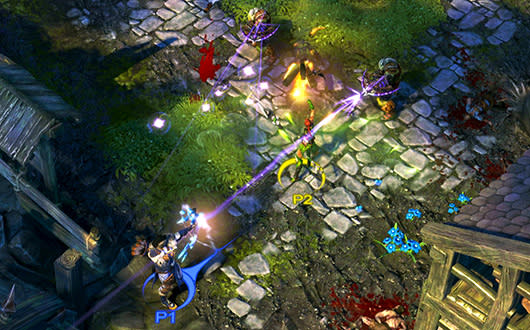 Action RPG Sacred 3 will hack and slash its way to PC, Xbox 360 and PS3 systems in North America on August 26. Deep Silver offered a new trailer for the top-down brawling game, which is geared toward both online (four player) and offline (two player) cooperative multiplayer.

Sacred 3 will be accompanied by a Malakhim class, which joins previous characters from the series, Seraphim, Ancarian, Khukuhru and the Safiri. Deep Silver will also offer an "Underworld Story" piece of downloadable content at the game's launch. In the Underworld Story DLC, players will ascend a tower to face Black Seraphim, a rival from the previous game in the series.
[Image: Deep Silver]
Show full PR text
SACRED 3: THE FIGHT FOR GLORY HAS BEGUN

Larkspur, Calif. – March 19, 2014 – Publisher Deep Silver pulled back the curtain on the upcoming and anticipated Sacred 3 today, revealing the first eye-popping gameplay footage for the arcade Hack 'n' Slash title. The trailer introduces a selection of unique character classes that will be available giving fans a glimpse of the fast-paced co-op action against countless enemies. The newest installment of the classic Sacred series will be available on August 26 in North America for the Xbox 360 games and entertainment system from Microsoft and the PlayStation®3 computer entertainment system as well as Windows PC.

At launch, Sacred 3 will include the Malakhim class as well as the unforgettable Underworld Story DLC. In Underworld, players have to forge their way to the top of a mysterious tower where they have to confront the Black Seraphim, a notorious rival from Sacred 2.

About Sacred 3
Sacred 3 features classic arcade Hack 'n' Slash action centered around drop in, drop out cooperative multiplayer for both offline (2 players) and online (4 players) play. The game brings back fan-favorite characters such as the Seraphim, Ancarian, Khukuhru and the Safiri, as well as introduces a new character, Malakhim. Each character class features its own unique skills and weapons which can be upgraded to match the player's very own combat style. As they master the art of war, players will fight their way through enemy hordes and try to outshine their fellow companions on their way to become the greatest hero of all. The inclusion of mission stats and online leaderboards will continue to drive competition both locally and online. Victory Is Ours. Glory is Mine.

About Deep Silver
Deep Silver develops and publishes interactive games for all platforms, seeking to deliver top-quality products that provide immersive game experiences driven by the desires of the gaming community. The company has published more than 200 games worldwide since 2003, including the best-selling zombie action Dead Island™ franchise, the critically-acclaimed Metro™: Last Light and the smash hit action adventure Saints Row IV™. Deep Silver is a wholly-owned subsidiary of Koch Media, GmbH, and includes the renowned development studio Deep Silver Volition, based in Champaign, IL. For more information, please visit www.deepsilver.com or follow us on twitter at @deepsilver.
In this article: Action-RPG, Deep-silver, gameplay, gameplay-trailer, microsoft, pc, playstation, ps3, release-date, rpg, sacred-3, trailer, xbox
All products recommended by Engadget are selected by our editorial team, independent of our parent company. Some of our stories include affiliate links. If you buy something through one of these links, we may earn an affiliate commission.