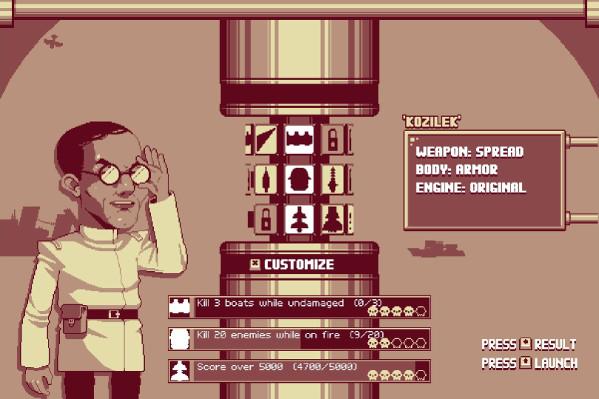 Let's not forget, it's been a bit of a journey for Luftrausers: The arcade shooter was yet another Vlambeer game to be opportunistically cloned before release, leading the two-man team to start live-streaming its development process in a bid to make clear they had their ideas first. Oh, and co-founder Rami Ismail even lost his backpack at last year's E3, which contained "pretty much my entire company" in his words, although he had everything he needed backed up. Still, maybe the Ridiculous Fishing studio should ironically name its next game Plain Sailing.

Luftrausers is out now on PS3, Vita, Windows PC, Mac and Linux, and we gave it a sky-high four-and-a-half stars in our review this week. In the words of Sam Prell, "even at its most infuriating, it's hard to stay mad at Luftrausers. The sense of flight and weightlessness is as intoxicating as the build-what-you-want nature of the game's war machines. And besides, dying is just an excuse to try out a new combo of parts, and I'm mighty curious to see how an armored, cannon-firing airplane with an underwater engine would handle."
[Image: Vlambeer]
In this article: linux, luftrausers, mac, pc, playstation, playstation-vita, ps3, PSN, sales, steam, vita, vlambeer
All products recommended by Engadget are selected by our editorial team, independent of our parent company. Some of our stories include affiliate links. If you buy something through one of these links, we may earn an affiliate commission.