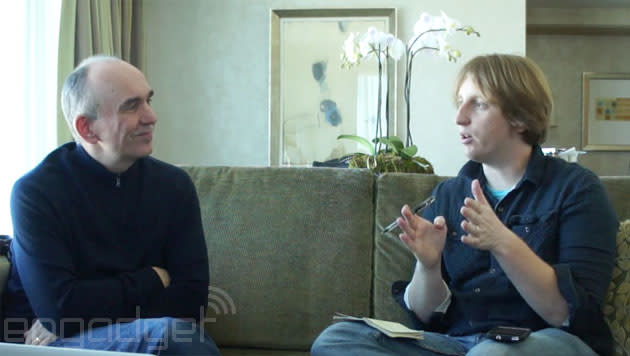 "I just want to make a world which I can be a god in," jokes developer Peter Molyneux (Fable, Curiosity) in a San Francisco hotel suite. "Imagine being able to make and construct a world under your own rules." He's speaking with us at GDC 2014, painting a picture of what he would do with access to a perfect virtual reality interface. Despite his history of building deity simulators, he doesn't have any plans for building the ultimate virtual god game -- today's virtual reality leaves him wanting.

"The problem is that, as a designer, I'm like a greedy child. I just want more." That's not to say he doesn't recognize how far virtual reality has come in recent years. Dragging on an electronic cigarette, Molyneux recalls using awkward "virtual reality" headsets in 1980s arcades. "It was a very different kind of VR," he says. "The Oculus Rift and the Sony stuff is a great step forward, but I want more. Really, what VR is, is immersion. I want my eyes to be immersed, my ears to be immersed ... I want to touch things in the world and I want to be able to see my hands." The technology to create the perfect Matrix-like playground he envisions simply isn't available yet -- not that it's stopped him from building god simulators.

Molyneux's current project, Godus, hails from more humble hardware, but he still thinks there's room for innovation. "If you look at the number of things we can use to entertain people in today's world, it's just amazing. There's all this tablet stuff, but I don't think yet there's been a game that really defines tablets for me, defines touch. There's been some good games, but there's not been great games." Moreover, he feels that the technology in our smartphones and tablets is underutilized -- navigation apps can track your speed and location to curate traffic data, yet few games make use of geolocation technologies. "We in the gaming industry have not used that yet," the creator bemoans. "We've got so many things we can exploit and use and squeeze the goodness out of. We're kind of like children when they go to Disneyland; we don't know which way to turn. You've got to narrow it down and focus on one thing." Picking technologies isn't easy, either. "If I wasn't doing this," he said, pointing to a test build of Godus, "I'd be seriously looking at VR."

What he is doing with Godus seems to have changed how he thinks about development. "It's been a fantastic, wonderful, scary and frightening experience." Molyneux may be a seasoned game designer, but Godus is his first foray into the world of crowdfunded gaming -- putting unfinished builds of the title in the hands of Kickstarter backers (through rewards) and Steam early-access buyers. "What's been amazing is to be able to look at the way people play. We've been able to see the mistakes we've made with the game a year before releasing it. The problem has been that people who pledged on Kickstarter, I think, expect it to be a completely finished game, and of course it's not." The early-access build is missing most of the game's content, he says. "It's like playing Call of Duty without guns!" Even so, Molyneux feels that the advantages outweigh the frustrations. "I wouldn't ever develop a game again without involving a community like the Kickstarter community."

Before we left, we couldn't help asking Molyneux if his opinion had changed about next-gen consoles. "I still don't think that they're a big enough step up from the last generation," the designer explains, echoing his own sentiments from E3 2013. "I mean, between the Xbox 360 and the Xbox One and the PlayStation 3 and PlayStation 4, this has happened," he says, picking up his iPad. "And this has changed the world."

Even so, Molyneux says that if he was still working with traditional consoles, he'd be pretty excited about having extra memory to play with -- but he still thinks it's not enough. "It's just another black box that sits under my TV. We're surrounded by new tech that's changing our lives; why should game consoles just take iterative steps?" For Molyneux, it's about innovation, and the new next-gen simply isn't innovative enough. "It seems to be the fad to put Nintendo down a bit, but at least with the Wii U they gave us something which we hadn't had before," he concluded. "Okay, it didn't feel right, but they were pushing themselves a little bit."

In this article: gaming, gdc, gdc2014, godus, interview, PeterMolyneux, VirtualReality
All products recommended by Engadget are selected by our editorial team, independent of our parent company. Some of our stories include affiliate links. If you buy something through one of these links, we may earn an affiliate commission.