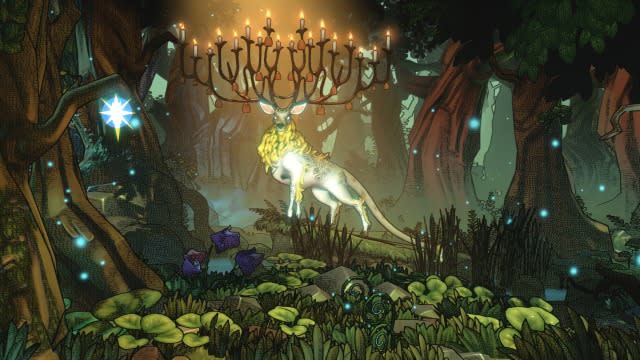 Harmonix is letting us in on a few more details about its upcoming game Disney Fantasia: Music Evolved. During a demo last week at GDC the company showed us a new discovery realm of the game called "The Hollow," a new multiplayer mode and took the wraps off of six new tracks coming to the colorful music-conducting game.

Similar to the underwater world we saw at E3, The Hollow is a part of the game meant for exploration rather than structured gameplay -- and the forest scene has a ton to explore. Much like the other discovery realms in the game, parts of world start to come into color the more songs you play, with a little taste of your completed songs incorporating itself into the world. Areas of The Hollow we saw had magical mushrooms that you could play (not that kind of magical shrooms; these), as well as fairies you can interact with and an elk with playable bells in its antlers. It all looks pretty amazing, and is something we could definitely see ourselves spending hours exploring. We played through a bit of the game on multiplayer, and were pretty impressed with how the game (and the Kinect) was able to handle two players conducting simultaneously. Back in the day when we saw the game on an Xbox 360, the Kinect had trouble understanding who was playing if others were in the room. Now that problem has been taken care of, and the Xbox One we did the demo on was able to identify and interact with two players simultaneously without picking up any of the movement from the handful of other people who were also in the room.

When Fantasia is released later this year it will have a total of 30 different songs. Today Harmonix is announcing six new additions to its already-announced roster of tracks:

The addition of Dvorak delivers on a promise developers made early on to include some tracks from the all-classical film in the mix. The song was one of the demos we saw last week, and one that we can guarantee you're going to want to play even if you aren't traditionally a classical fan.

All in all it looks like the game is coming together nicely, and is going to be a blast to play. It's expected to hit stores at a TBD date later this year. If you're anxious to get a peek yourself, you can get a glimpse of some of the Dvorak song and The Hollow in the vid below.

In this article: Fantasia, fantasia-music-evolved, GDC, GDC 2014, gdc2014, Harmonix
All products recommended by Engadget are selected by our editorial team, independent of our parent company. Some of our stories include affiliate links. If you buy something through one of these links, we may earn an affiliate commission.