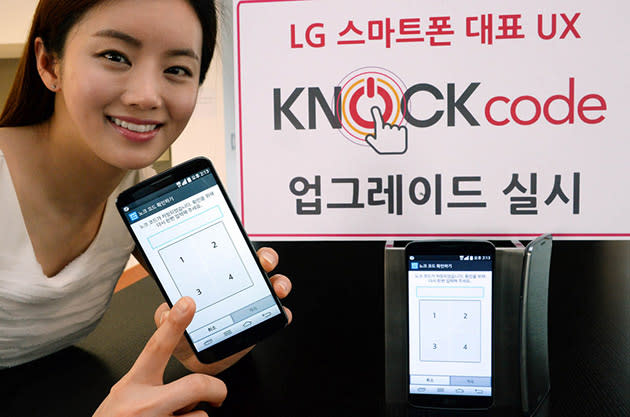 LG's staying true to its word and updating the basic KnockON feature found on the G2 and the G Flex with its newer, more sophisticated Knock Code technology. The South Korean company launched the feature on the G Pro 2 in February, with a promise that it'll eventually be available on older models. While the older knock technology only switches a screen on or off when you tap it, Knock Code lets you bypass the lock screen altogether. You merely need to configure a phone's security setting to recognize a combination of up to eight taps made on four sections of the screen beforehand. The security feature's slated to arrive on the handsets sometime in April through a firmware update -- the bad news is, there's no clear word on which countries will get it. Obviously, users in LG's home turf will be some of the first to enjoy the feature, but everyone else will just have to cross their fingers.

In this article: g2, GFlex, lg, mobilepostcross
All products recommended by Engadget are selected by our editorial team, independent of our parent company. Some of our stories include affiliate links. If you buy something through one of these links, we may earn an affiliate commission.