HTC opens up BlinkFeed, allows apps like Foursquare and Fitbit to push data to your homescreen 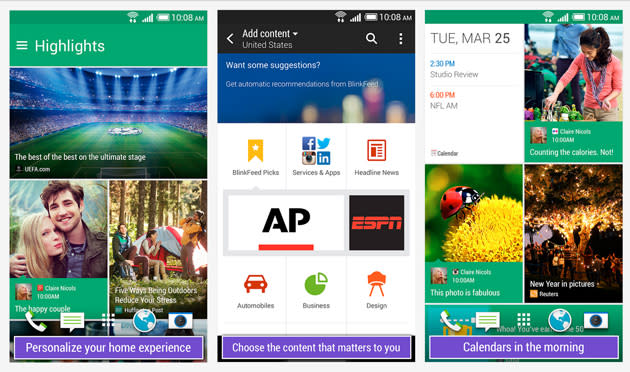 It was easy to miss in the fine print of yesterday's HTC One press release, but it appears that BlinkFeed will be coming to the Play Store for non-HTC devices. We knew that a number of Sense apps were being broken free of their firmware chains, in particular Zoe, but it wasn't clear just how fare the company was going to take that initiative. Now we know that the company plans to offer its own branded experience to any Android user. And it's even putting BlinkFeed, which is arguably the centerpiece of Sense, up in the app store for use on devices running TouchWiz or even vanilla Android. For now it's only listed as being compatible with the M8, but press materials state that:

While we've never been huge fans of companies messing with the pure Android experience around here, we're certainly in favor of more consumer options. With the Google Now Launcher in the app store and BlinkFeed coming soon it might not be long before you can buy whatever high-end handset your little heart desires then slap the launcher of your choice on top of it -- be it HTC, Google, Samsung or Sony.

In this article: blinkfeed, htc, htc one, mobilepostcross, sense
All products recommended by Engadget are selected by our editorial team, independent of our parent company. Some of our stories include affiliate links. If you buy something through one of these links, we may earn an affiliate commission.