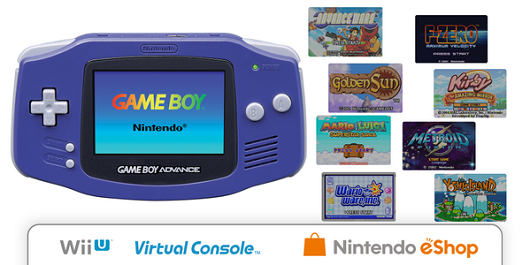 Following yesterday's reveal of Advance Wars, we now know the other Game Boy Advance games coming to the Wii U Virtual Console in North America and Europe next month, as well as Japan. They each cost $8 with the exceptions of WarioWare Inc: Mega Microgames, Kirby and the Amazing Mirror, and F-Zero: Maximum Velocity which are all tagged at $7.

We've got the full line-up of games and release dates for North America and Europe after the break, but for starters, Advance Wars is joined by Metroid Fusion and Mario & Luigi: Superstar's Saga next week on April 3. Also, praise the Golden Sun! Camelot's revered JRPG is due on April 17.

As for Japan, there are a bumper six games due on April 3 including Super Mario Advance 2, the GBA version of Super Mario World, and the Japan-only compilation of Advance Wars 1 and 2. Japan also has a special offer on the GBA games, where if you buy one you can get another at 30 percent off.

Update: Nintendo of America announced its line-up and it matches Europe's exactly, with the same games arriving on the same dates. We've updated the post to reflect that. Also, Super Mario Bros. 3 is coming to the Wii U and 3DS on April 17, priced $5.
[Image: Nintendo]

Japan
In this article: eShop, europe, Game-Boy-Advance, GBA, japan, nintendo, release-date, Super-Mario-Bros-3, virtual-console, wii-u
All products recommended by Engadget are selected by our editorial team, independent of our parent company. Some of our stories include affiliate links. If you buy something through one of these links, we may earn an affiliate commission.