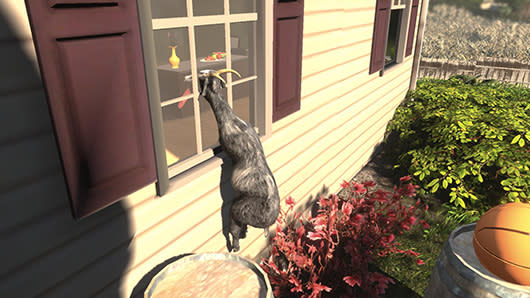 Getting the gist of Goat Simulator isn't that hard, even if the title conjures the image of cute, semi-evil livestock munching on a tranquil mountaintop. What we have here is a misappropriation of computational cycles – not to mention the Unreal engine – to render an obnoxious, destructive beast that lives to ruin a generic suburb.

But there is a game in there, not just a joke. Developer Armin Ibrasagic of Coffee Stain Studios (Sanctum) explained his design inspiration to us during the Game Developers Conference, ahead of Goat Simulator's wide release through Steam on April 1. Based on our dumb video above, the argument goes something like this:

1) Goat Simulator depicts and encourages the ram-ifications of being near an insane goat.
2) Since all animals are goats – just watch the video – it follows that all animals are simulated here.
3) Hawks are animals.
4) Pro skater Tony Hawk is part of the Hawk family and is therefore an animal.
5) It follows that Goat Simulator is simulating Tony Hawk, "except instead of a skater you're a goat, and instead of doing tricks you make people angry."
In this article: coffee-stain-studios, gdc-2014, goat-simulator, pc, recommended
All products recommended by Engadget are selected by our editorial team, independent of our parent company. Some of our stories include affiliate links. If you buy something through one of these links, we may earn an affiliate commission.