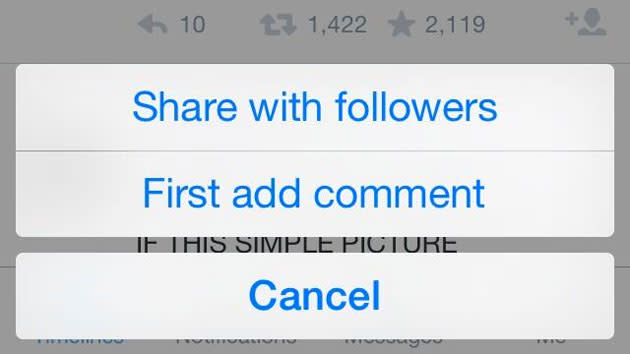 Twitter can't help itself. If it's not new pictures, tweet views and video previews, then it could be an epoch-defining change to what the social network called one of its core features: retweets. So, it's possibly not a big deal, but in Twitter's latest experiment, it's been changed to 'share' -- terminology closer aligned to its rival, Facebook. For the moment, only a handful of users appear to see the substitute share button and it's appearing in both the Android and iOS apps. At the same time, and probably unrelated, a new design to profile pages inside mobile apps has also appeared, with a not-so-faint Facebook vibe. Take a look after the break, and if you're one of the chosen few, let us know your thoughts on either experiment in the comments.

In this article: experiment, internet, mobilepostcross, retweet, rt, share, socialmedia, test, twitter
All products recommended by Engadget are selected by our editorial team, independent of our parent company. Some of our stories include affiliate links. If you buy something through one of these links, we may earn an affiliate commission.