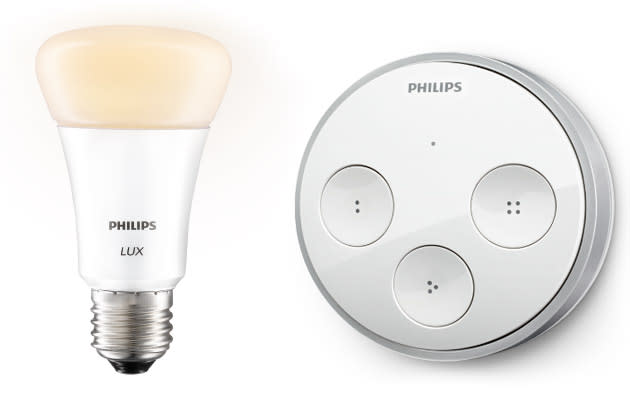 Think you're all done building out your Hue lighting collection? Think again. Philips' latest product is one you're likely going to want to own. The tap switch, available later this year for $60, lets you control connected lights wirelessly by tapping one of four buttons. More impressive, however, is the switch's ability to turn lights off and on without requiring a power source of its own. The device is powered by kinetic energy, so a tap creates enough juice to complete each task. Philips is also announcing a new "lux" bulb, which looks and operates like traditional Hue units, albeit without the 16 million colors. This bulb emits only white light, but it's reportedly very bright. Lux is set to retail for $40 per bulb (compared to $60 for the color version), or $100 in a set of two bundled with a Hue base as well. Like the switch, lux will ship in Europe and North America after the summer.

In this article: bulb, bulbs, hue, light, lighting, lights, philips, philipshue
All products recommended by Engadget are selected by our editorial team, independent of our parent company. Some of our stories include affiliate links. If you buy something through one of these links, we may earn an affiliate commission.