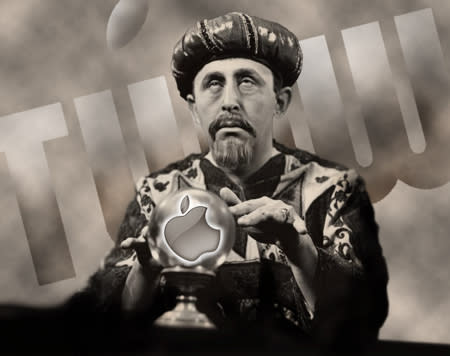 There's not much happening with Apple rumors at the moment; only two worth mentioning came out in the past few days.

iPhone 6 Reportedly Launching 'As Early As September' in 4.7- and 5.5-Inch Sizes (MacRumors)

Writers for Japanese business newspaper Nikkei apparently read the same rumors as everyone else, because they posted the same tired, unverifiable gossip about iPhones coming out in various larger sizes.

Has anyone ever come out with a legitimate use case for a larger-screened iPhone besides "Samsung did it, therefore Apple has to do it?" Bumping up the screen size from 3.5 to 4 inches and shifting the screen's aspect ratio from 3:2 to 16:9 for the iPhone 5 made sense. It definitely made the experience of viewing videos better, and the extra screen real estate made browsing the web much easier (at least in portrait mode).

What is a 4.7-inch or 5.5-inch iPhone going to give us that we don't already have? You might think "a bigger battery" right off, but this is somewhat analogous to the fundamental problem facing rocket engineers. For them it's a problem of needing to burn extra fuel for every extra litre of fuel a rocket carries; in the iPhone's case, a larger device will have a bigger display, which will require more power, which will offset any benefit conferred by a larger battery.

An increased screen resolution only makes sense if Apple follows the same model it did when it introduced the Retina display with the iPhone 4. There, a simple doubling of pixel count in vertical and horizontal dimensions made it (relatively) easy for developers to update their apps and take advantage of the extra resolution. The iPhone 5 proved to be moderately more problematic, as there were extra pixels on either side of existing apps that needed to be filled.

If Apple introduces another display resolution (say, 1920 x 1080) in the next-gen iPhone, it'll only be compounding an existing problem. Apple likes to poke fun at Android and the fragmentation issues that platform suffers due to having to support a wide variety of devices and display sizes, so the company won't be doing itself any favors if it goes down that same road.

On the other hand, Mac software developers are able to handle a wide variety of display dimensions and resolutions without much trouble, so the issue of doing the same work for the iPhone may ultimately prove to be overstated. We'll see.

From the article: "this schematic may very well just be a design that Apple has been playing around with and nothing more."

It's also likely a fake, which is something BGR forgot to address.