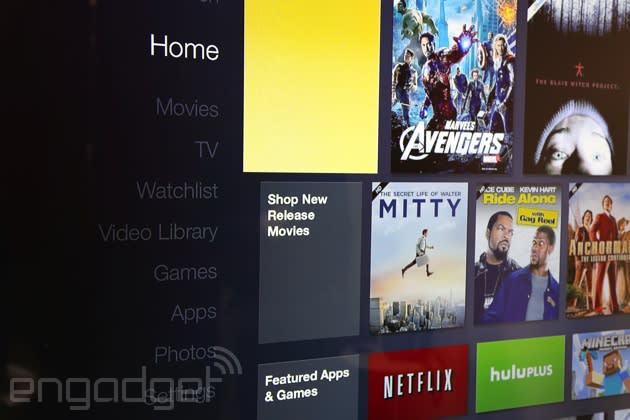 We came away relatively impressed with the Fire TV during our brief hands-on. But we all know that units set up specifically for press demonstrations are hardly the best indicator of how a device will function in the real world. So we immediately went back to our lair and began putting the newest kid on the streaming block through its paces. Once away from the carefully controlled demonstration area, it became clear that the Fire TV is more of a mixed bag -- and still tied to its Android/Google TV roots -- than Amazon would like you to believe. When you first plug in your Fire TV you're treated to a rather lengthy instructional video hosted by a sketchy (as in crudely drawn, not as in disreputable) man. Most of the functions are pretty straight forward, but it's a nice touch, especially for the less tech savvy out there. The Fire TV is definitely a streaming set-top box you could give to your grandmother. It certainly helps that the whole UI is intelligently designed and extremely intuitive. Our only major complaint from an interface standpoint is that it can be a little busy at times. All the large images and tile-like collections of apps and movies that populate the Home tab are pretty, but a little distracting. Still, it's responsive and we didn't encounter a single stutter over the course of an afternoon spent installing several apps, a game or two and streaming plenty of movies, TV shows, YouTube clips and music.

One feature that we felt let down a little by was ASAP. While it was flawless during the demonstrations both on and off stage at Amazon's New York event, things weren't quite as smooth back in the dark recesses of Engadget HQ. The first title we fired up simply failed to play at all, while the Blair Witch Project took a full 36 seconds to start. On the other hand, The Avengers only displayed a loading screen for roughly one second and after that we were able to bounce around the movie seamlessly. And when we backed out to the menu and picked Skyfall from the suggested titles, it started up instantly -- just like it did during the demo. It seems that maybe we needed to let the Fire TV warm up first. We are extremely happy to report that multitasking is not only possible, but also the hardware appears more than capable of handling it. We were able to fire up our favorite Pandora station then drop out to the main menu, install Sev Zero and play through the entire first level without dropping a frame or causing the audio to skip. Obviously playing a song in the background isn't particularly taxing, but it's likely to be the only time you make use of the Fire TV's multitasking ability.

Nothing highlights both the strengths and weaknesses of Amazon's set-top quite like the app selection. Plenty of major services are represented -- though a few of their apps are just ported Google TV products. While that certainly made it easy for companies to get on board with the new platform, the results often leave something to be desired. The YouTube app even preserves the indicators for keyboard shortcuts, despite the fact that you can't currently use a keyboard with the Fire TV.

Even search left us with some mixed feelings. The voice search functions almost flawlessly -- it's fast, accurate and always just a button press away. But sometimes voice search can be tripped up by foreign or gibberish words. (Just try getting it to recognize Suspiria.) Or, perhaps you're one of the millions of people out there with a speech disorder or impediment. Then you'll have to rely on text search, and while Amazon was eager to poke fun at Roku's onscreen keyboard and compared it to entering your high score on an NES, the Fire TV solution is even more onerous. First, you'll have to move up to the search tab on the left side, then over to the right to the search interface, then up again to access the text search (it defaults to voice). Then you're presented with a carousel of letters that you must scroll through from A-Z, punching in each one manually.

In general it seems like the good outweighs the bad on the Fire TV, but -- likely for the sake of expediency -- it's clear there were a few questionable decisions made. We'll withhold judgment though until our full review.

In this article: amazon, amazonvideo2014, fire tv, firetv, hands-on, hdpostcross, SetTopBox, streaming media, uk-feature, video
All products recommended by Engadget are selected by our editorial team, independent of our parent company. Some of our stories include affiliate links. If you buy something through one of these links, we may earn an affiliate commission.