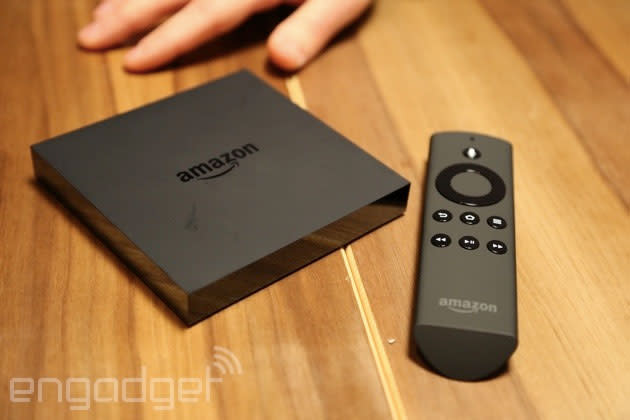 The first thing you notice when you pick up the Fire TV is how incredibly dense it is. It's tiny and encased in black matte plastic, but it feels like a solid brick of aluminum. That's not terribly surprising when you consider all of the power Amazon has crammed inside this thing. Though we're not sure about the speeds on its quad-core CPU and dedicated GPU, the company claims it has three times the processing power of its rivals like Roku and Apple TV. In any case, it's clear the silicon inside is pretty beefy, and it's likely that the chassis is a giant heatsink.

During our brief time with the device, it was every bit as quick and impressive as it was during the on-stage demo. Voice searches were quick, if not exactly flawless thanks to the rather noisy demo area. It was less than a second from when I finished speaking to when the results popped up on screen (though, it seemed odd that Amazon assumed I meant "Klint Eastwood"). Despite its insistence that it handled search better than platforms like Roku, we'd have to say things aren't so cut and dry. Sure, you can voice search using the microphone on the remote, but searching with text requires the same cumbersome reliance on the remote's directional pad and an onscreen keyboard. Not to mention that Roku and Chromecast are also able to deliver voice search through their respective mobile apps. Browsing through content, launching apps -- all of it was impressively quick. Obviously, how a device behaves when it's fresh and being demoed for the press isn't a perfect indication of how it will behave a year from now in the living room of a demanding user, but our initial impressions were definitely positive. The most exciting thing was watching it play a video. And that's not because it spit out beautiful 1080p content (which it did). It's because the device didn't even take a breath before launching into our selection.

When Peter Larsen showed off how quickly the company's ASAP technology allowed the Fire TV to start playing a video on stage, we were impressed but skeptical. After spending some time with the Fire TV, we feel obligated to apologize for our skepticism. Basically ASAP preloads certain videos based on where you are in the UI. When you click through to the page for a movie, it automatically starts downloading it in the background. If you hover over a selection for a period of time while browsing, it'll do the same. And if you've been watching Alpha House, it will automatically cache a portion of the next episode.

Even if we resumed Wolverine from the middle of the movie, we were able to quickly hop back to the beginning and it started playing immediately. Unfortunately there's no quick option for starting a movie or show over. You have to resume the video first, then rewind to the beginning -- though, at full speed, getting back to the start of a movie was relatively fast. Reps did confirm that a quick shortcut to start over would be coming to Fire TV soon, after listening to feedback from testers during the beta period.

Gaming was also pretty smooth, though it's not exactly perfect. Frame rates were steady and titles loaded quickly enough, but there was still some noticeable lag when it came to input. We noticed similar lag when trying to navigate the main UI with the game controller. We'll avoid being too harsh though, seeing as how there were roughly 10 Fire TVs all in the same room connected to Bluetooth gamepads. A major concern is going to be apps. While Amazon has control over the content it provides directly, it can't guarantee the same quality from other services. That's immediately apparent when launching the Hulu app. While we wouldn't call the experience painful, there was a very noticeable delay between making selections and the next page loading.

The big question mark here is price. Sure, Amazon is delivering a premium experience and more power than the Roku, Google or Apple. But is the promise of compelling gaming and instantly loading videos enough to make consumers choose the $99 Fire TV over the $35 Chromecast? We'll just have to wait for sales figures to know for sure.

In this article: amazon, amazonvideo2014, fire tv, firetv, hands-on, hdpostcross, uk-feature, video
All products recommended by Engadget are selected by our editorial team, independent of our parent company. Some of our stories include affiliate links. If you buy something through one of these links, we may earn an affiliate commission.