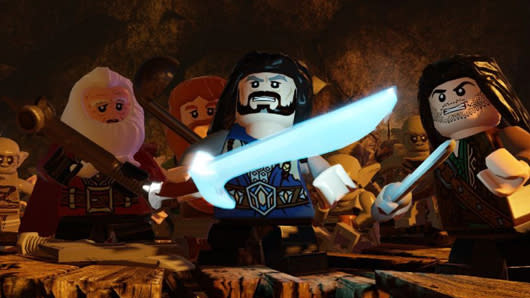 When Lego: The Hobbit debuts in April, the game will only feature content from The Hobbit: An Unexpected Journey and The Desolation of Smaug, though the third film in the Peter Jackson-directed trilogy may appear later as DLC, according to reports from the London Toy Fair.

Brick Fanatics, a UK site focusing on all things Lego, states that developer Traveler's Tales plans to launch a sizable downloadable addition for Lego: The Hobbit right around the same time that The Hobbit: There And Back Again rolls into theaters. The film is currently slated to debut on December 17, giving the developer eight months to cobble together its downloadable content.

As Brick Fanatics points out, this will be a novel situation for the developer. Traveler's Tales has released DLC for its previous Lego games, though so far it's all been minor additions like characters and new costumes. On the other hand, Traveler's Tales has a long history of working with cinematic trilogies, so it makes a certain kind of sense that the developer would want to touch on the final Hobbit film, even if its game will debut eight months prior to the movie's launch.

Lego: The Hobbit will reach the Xbox 360, Xbox One, PlayStation 3, PlayStation 4, Vita handheld, Wii U and 3DS on April 8.
[Image: WB]
In this article: 3ds, dlc, hollywood, lego, lego-the-hobbit, microsoft, nintendo, peter-jackson, playstation, playstation-vita, ps3, ps4, the-hobbit-there-and-back-again, vita, wii-u, xbox, xbox-one
All products recommended by Engadget are selected by our editorial team, independent of our parent company. Some of our stories include affiliate links. If you buy something through one of these links, we may earn an affiliate commission.