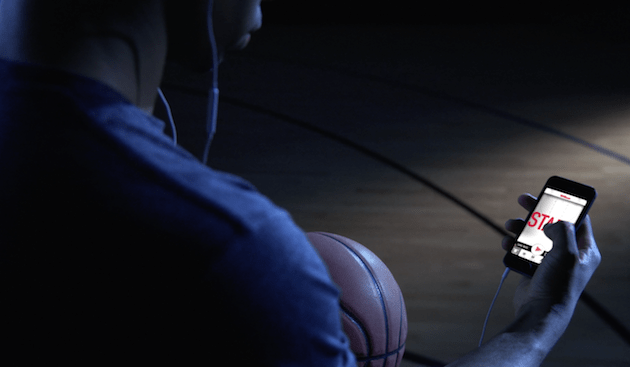 Ahead of the NCAA men's Final Four, which takes place today and you can watch via March Madness Live 2014 or on TV, sporting goods maker Wilson has revealed its new, smart basketball. Due to launch this winter (around the holiday season, we're told), Wilson's attempting to revolutionize the game of hoops by placing performance-tracking sensors inside of a basketball. The technology, developed by Wilson in partnership with Finnish artificial intelligence firm SportIQ, will allow players to pair the ball with an app and use it to easily track performance data. This means you can see how well you're shooting; which spots on the court you're most efficient from; the amount of time it takes you to let a shot go; and when shots have been made or missed.

As it stands, Wilson says its newly minted intelligent ball is a consumer-focused initiative, but that it is "certainly extendable" to future basketball competitions. Wilson's VP of Digital, Tom Gruger, told Engadget that development for the ball started more than two years ago, and the goal from the beginning was to "provide actionable data to players so their training could be more focused on 'actual' rather than 'perceived' performance." Gruger also said the company is working to bring a similar type of tech to products from other sports: "Wilson is pursuing solutions in all of its primary sport categories. We're excited by the roadmap ahead and feel that we can change the way that sport is approached." 5
In this article: Ball, Basketball, connected basketball, exclusive, hdpostcross, NCAA, Smart Basketball, SportIQ, Sports, Wilson, Wilson Smart Basketball
All products recommended by Engadget are selected by our editorial team, independent of our parent company. Some of our stories include affiliate links. If you buy something through one of these links, we may earn an affiliate commission.