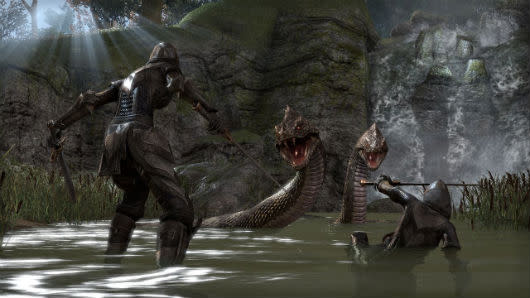 It's not a No. 1, but Bethesda may be quietly satisfied with how The Elder Scrolls Online fared in the UK. The MMO's launch on Windows PC and Mac was enough to take it up to second place, and there are still PS4 and Xbox One versions to unravel in June.

As it is, we may have to get used to the name currently on top of the UK charts. FIFA 14 is now up to 11 weeks in total (non-consecutive) as the country's No. 1, and - as if it needed the help - the English soccer season is excitingly close this year, and there's a World Cup just two months away. In related news, let's go live to the scene at EA Sports HQ...
[Image: Bethesda]
Top 10 UK Software Sales (All Formats); week ending April 5:
In this article: 3ds, bethesda, Bethesda-Softworks, chart-track, chart-track-weekly, EA, ea-sports, fifa-14, mac, microsoft, nintendo, pc, playstation, playstation-vita, ps3, ps4, the-elder-scrolls-online, uk-charts, vita, xbox, xbox-one
All products recommended by Engadget are selected by our editorial team, independent of our parent company. Some of our stories include affiliate links. If you buy something through one of these links, we may earn an affiliate commission.