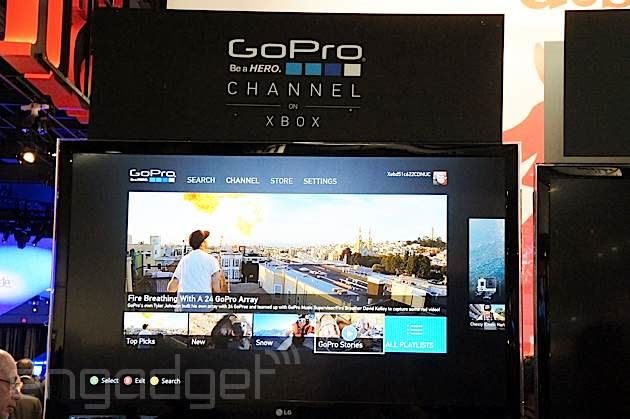 Back in January, GoPro tipped us off that it was bringing a dedicated channel to Xbox 360 and Xbox One. At the time, we didn't really have much more info, other than it was a port of the company's existing offering that had been entertaining Virgin America customers since last fall. Today Tomorrow we get to see it for real. Well, that's if you're an Xbox 360 owner -- because as promised it's landing there first. If you're an Xbox Live Gold subscriber, then you're basically all set, ready to enjoy some of the exclusive content that GoPro is slinging onto the channel by means of launch celebration (teasers for which, are after the break). As well as viewing curated GoPro videos, users will also (handily) be able to purchase cameras and accessories without even putting down the controller, including the exact kit used in that particular video. While there's still no word on when it will land on the latest generations Xbox (other than "summer"), we're fairly confident you'll be able to view your fave triple cork videos on even more devices and platforms by the end of the year.

In this article: gopro, gopro channel, hdpostcross, xbox, xbox 360, xbox live
All products recommended by Engadget are selected by our editorial team, independent of our parent company. Some of our stories include affiliate links. If you buy something through one of these links, we may earn an affiliate commission.