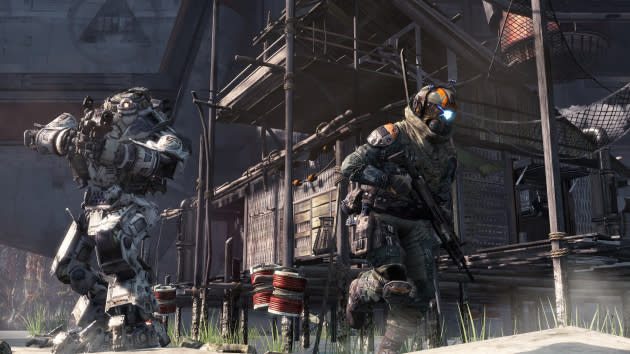 Titanfall doesn't officially release for Xbox 360 until tomorrow, but somehow a few gamers have gotten it early and, what's more, they've decided to show it off. The good news is that the game appears to play exactly the same on the Xbox 360 as it does its current-gen counterpart -- just as developer Bluepoint Games promised. The graphical fidelity isn't as easy to judge, however. Two of the videos below (spotted by NeoGAF) aren't what we'd call great representations of the title: one is a Twitch stream and another looks like it was shot with a cheap handheld camera. A third is a full direct-feed Attrition match on Boneyard. In the Twitch stream, the game is a bit laggy and the frame rate dips quite a bit in spots, but that could be a result of the game running on pre-release servers. We spoke with the user and he said that since that stream he's had a much better experience with very low ping.

In the shaky-cam video, you can clearly see that tucked away in the options menu is a checkbox for locking the frame rate at 30Hz, which should improve performance. The Attrition match runs pretty well from start to finish, and looks pretty okay in the graphics department too. We're comparing the two different versions against one another this week, so keep it tuned here for our impressions.

In this article: Bluepoint-Games, gaming, hd, hdpostcross, RespawnEntertainment, titanfall, Xbox360, XboxOne
All products recommended by Engadget are selected by our editorial team, independent of our parent company. Some of our stories include affiliate links. If you buy something through one of these links, we may earn an affiliate commission.