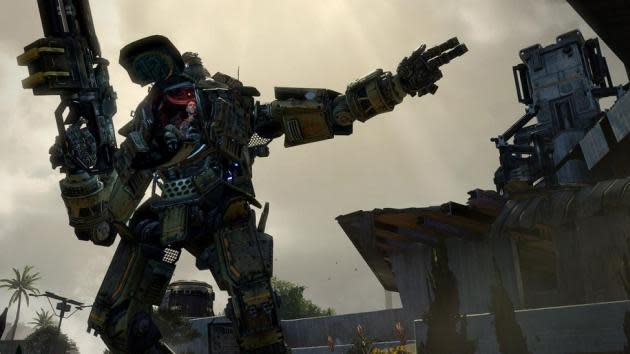 We've long known that Titanfall was coming to the Xbox 360 in addition to the Xbox One but, aside from that sliver of info, there hasn't been much to go on -- unless you count release delays, that is. Now we're learning that on paper, at least, it won't stray too far from the Xbox One version's shadow when it comes out next week. The last-gen version has all of the maps, modes and features of the Respawn-developed game, but naturally some concessions have been made to accommodate the 360's nine-year-old hardware. As developer Bluepoint Games' senior producer Daryl Allison writes, the game can't hit the same frame rates as its sibling, but it runs "above 30 fps" -- around half the speed you'd get on the Xbox One.

Update: We still haven't seen the actual game on Xbox 360, but copies are apparently out there already. One YouTuber posted a video of the intro sequence including the BluePoint Games logo, but that's all you'll get since the servers aren't available yet -- check out the so-close-but-yet-so-far tease after the break.

That's a pretty considerable difference, and it's akin to what DICE has done to port the last few Battlefield games to older consoles. What's troubling, however, is that even though the game releases in a few days, we still haven't seen any screenshots or videos of it in action. That alone should be reason enough to hold off on buying until reviews start cropping up.

In this article: Bluepoint-Games, bluepointgames, gaming, hd, hdpostcross, Respawn-Entertainment, titanfall, video, Xbox360, XboxOne
All products recommended by Engadget are selected by our editorial team, independent of our parent company. Some of our stories include affiliate links. If you buy something through one of these links, we may earn an affiliate commission.