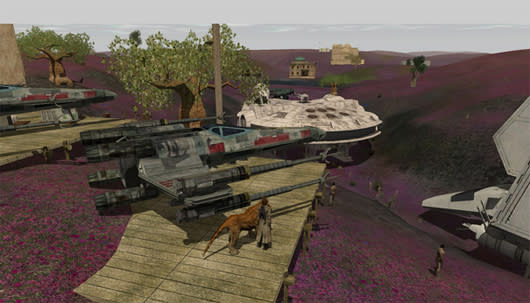 Massively reader dirtyklingon recently wrote to us with an interesting observation. He was surprised at the backlash that was generated when SOE's John Smedley teased a new MMO for Star Wars Galaxies fans but then revealed it would not be Star Wars but a survival-based contemporary sandbox setting -- by most guesses, zombies. I don't think most people really expected Star Wars Galaxies II (or Star Wars at all, for that matter), but I was pretty disappointed. The setting of SWG wasn't essential, but I expected something much closer to it in theme from the new game, something a bit more space cowboyish without the Star Wars name. I'll tolerate a lot of settings to play a good sandbox, but a few are real turn-offs and can actually be dealbreakers. Like, you know, zombies.

What about you, Massively crew -- how important is the setting of your MMOs? Can it make or break your experience?

Every morning, the Massively bloggers probe the minds of their readers with deep, thought-provoking questions about that most serious of topics: massively online gaming. We crave your opinions, so grab your caffeinated beverage of choice and chime in on today's Daily Grind!
In this article: brianna-royce-tdg, daily-grind, dirtyklingon, john-smedley, opinion, sandbox, setting, soe, space-cowboys, star-wars, star-wars-galaxies, swg, tdg, the-daily-grind, zombies
All products recommended by Engadget are selected by our editorial team, independent of our parent company. Some of our stories include affiliate links. If you buy something through one of these links, we may earn an affiliate commission.