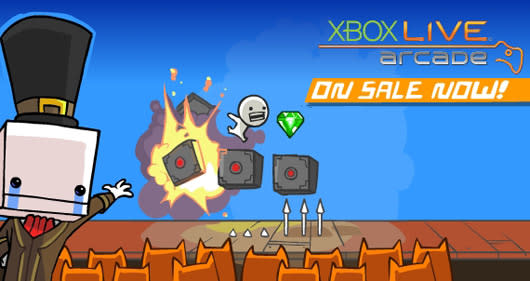 Castle Crashers, originally released back in 2008, is an arcade-style beat-'em-up in which up to four players band together to slay armies of barbarians, demons, and dragons. The more recent BattleBlock Theater puts a teamwork-oriented spin on the platforming genre, challenging players to work together as they clear dozens of included co-op levels.

As a bonus, players who purchase both featured games will unlock Hatty Hattington in Castle Crashers and the Knight in BattleBlock Theater. The Behemoth's sale continues through April 14.

[Image: The Behemoth]
In this article: battleblock-theater, castle-crashers, microsoft, the-behemoth, xbla, xbox, xbox-live-arcade
All products recommended by Engadget are selected by our editorial team, independent of our parent company. Some of our stories include affiliate links. If you buy something through one of these links, we may earn an affiliate commission.