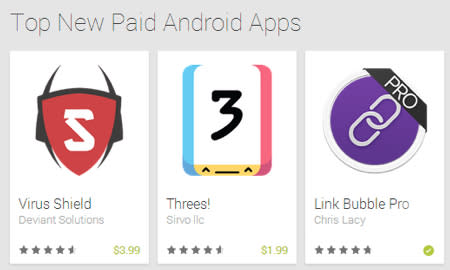 The debate over which app marketplace model is best -- Apple's "walled garden" or Google's much more open approach -- will likely never be settled. For developers who favor the Play Store, the ability to immediately iterate on their apps and fix bugs without delay is fantastic, while App Store devotees quickly point out the value of having a more rigid screening process in place. If you're in the App Store camp, you can add an arrow to your quiver thanks to an Android app called Virus Shield.

The app, which sold for a pricey US$3.99, rocketed to the top of the Play Store's paid apps chart thanks to its claimed ability to keep Android devices free of malware. The app's "features" included the ability to scan files and media on an Android device in real time, alerting the owner of any suspicious activity while at the same time preventing future attacks. All told, over 10,000 people paid the premium for the app's services, giving it a shining 4.7/5 rating.

Unfortunately, it was all a scam: Virus Shield did nothing to protect any device and its entire feature list was false. The app quite literally ran a fake "scan" and then produced a check mark after it was done, assuring the user that no malware was present.

The good people of Android Police were the first to actually dig into the guts of the popular app and discover that it had absolutely no utility function whatsoever. The app has since been pulled from the marketplace, but attempts to track down its creator -- the one who raked in tens of thousands of dollar off of an app that did absolutely nothing -- have been fruitless.

Google's just-announced on-device monitoring of apps is a nice step towards weeding out existing scams, but if it can't prevent shoppers from downloading (and paying for) the apps ahead of time, its ability to limit situations such as this is questionable.

So while Apple's App Store review process isn't perfect, and can put a damper on the quick turnaround offered by more open alternatives, you can be confident that this type of thing wouldn't happen inside the walled garden. Sure, developers might sneak a Super Nintendo emulator onto Apple's shelves every once in a while, but I'm OK with that.

Note: To be fair, there are plenty of shady apps on the App Store as well, and I've written about many of them. This one, however, is a particularly shameless cash grab that does literally nothing it claims to do, which is something the App Store review process would almost certainly weed out.

In this article: android, app store, apps, scams, walled garden
All products recommended by Engadget are selected by our editorial team, independent of our parent company. Some of our stories include affiliate links. If you buy something through one of these links, we may earn an affiliate commission.