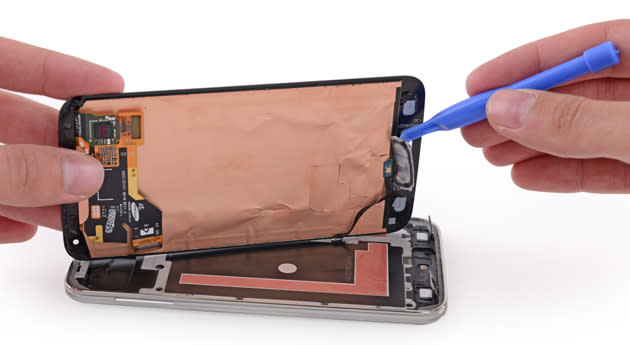 An easily expandable phone isn't always an easily repairable phone. If you need proof, take a look at iFixit's newly completed teardown of the Galaxy S5. While Samsung's latest flagship gets some kudos for its removable battery and microSD slot, it's considerably tougher to take apart than its GS4 predecessor. You now have to remove the display if you want to replace any of the internals, and the removal process is especially tricky; part replacements are only easy once you're past this daunting hurdle. There aren't any surprises under the hood, although it's worth noting that Samsung is using a Maxim heart rate sensor chip and a Synaptics fingerprint reader. From all indications, the GS5 is still easier to fix than some phones we know -- it's just not the walk in the park that we saw last year.

In this article: android, diy, fingerprint, galaxys5, ifixit, maxim, mobilepostcross, repair, samsung, smartphone, synaptics, teardown
All products recommended by Engadget are selected by our editorial team, independent of our parent company. Some of our stories include affiliate links. If you buy something through one of these links, we may earn an affiliate commission.