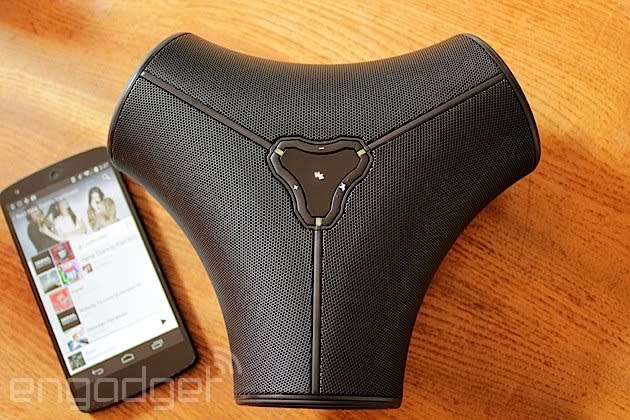 There are few topics that can set a gadget conversation alight than the humble Bluetooth speaker. Why? Partly thanks to cheap Asian products that have given the category a bad name. And, partly because Bluetooth was never really designed with high fidelity audio in mind -- yet there seems to be a never ending deluge of products trying to convince us otherwise. Some brands, however, have managed to buck the trend, and win over buyers. But they are a select, usually monied/established group. Enter Spaced360: neither a known name, nor an off the shelf OEM. Those rarest of breeds: an independent British company with audio heritage, putting a new spin on the little old Bluetooth speaker. Or, given the "360" name, maybe it's a revolution? Maybe...

Yes, it's another Bluetooth speaker, but wait, don't turn off yet. This one's different. While you might not have heard of Spaced360 yet, it's actually a spin off from a company we've seen before: Orbitsound (space... 360... get it?). The speaker itself is instantly eye-catching thanks to its three-sided/triangular/unusual design. The concept here is to create a speaker that you place in the centre of the room, not stuck away in the far corner. The hope is to go after the 5am back-to-ours crowd that huddle sociably around the music, doing whatever else they might be doing. Spaced360 assures us, it's not just three drivers pointing out into the wild, either. The product is actually six drivers, half on the mid-high frequencies, and the rest taking care of the low end. All the drivers are positioned as such to create a consistent 360-degree "sweet spot." The internal battery offers between four and six hours of use at full blast, and a proprietary charger slips discreetly underneath for when that's just not enough. Oh, did we mention it has NFC and a 3.5mm input too? The circular audio configuration isn't the only distinction. Unusually for this kind of product, the bass hasn't been jacked up to out of control levels. In fact, the makers have tried to keep the response as flat as possible. That fact alone will be music to many people's ears. Add in the all important support for aptX and A2DP (which is what stops Bluetooth audio from sounding criminal) and things are on the right path. We've fed a variety of music through this, side by side with competing products, and were relieved not only to hear a signal seemingly untouched by aggressive EQ, but one with decent dynamics too. There's another flourish we're reserving judgement on for now though, and that's the option to buy brightly coloured covers/cases to house your speaker. We're told there's no effect on the audio (cutouts are placed where the drivers reside), but it's perhaps an unnecessary grab at the youthful wallet (they're £30 a pop) -- but if you're quick, early buyers will get one free for a limited time. Which brings us neatly onto price. At £250, this is right up there with the current Bluetooth speaker royalty. That's quite a lot of money to lay down, almost enough to fund a (small) revolution.

In this article: BluetoothSpeaker, hands-on, spaced360, uk-feature
All products recommended by Engadget are selected by our editorial team, independent of our parent company. Some of our stories include affiliate links. If you buy something through one of these links, we may earn an affiliate commission.