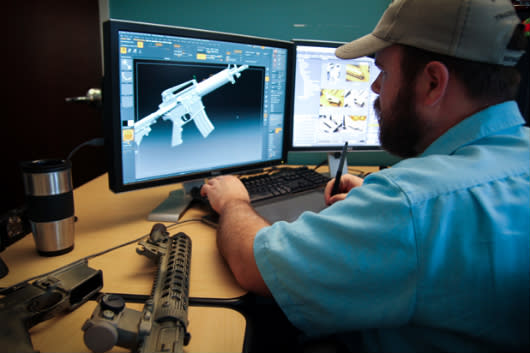 "I, personally, have been doing it for about six years now," Red Storm Lead Weapons Designer JD Cragg says in an Ubisoft blog post. "One of the guys on my team has been doing it for almost nine. This is pretty much all I do – authentic military weapons, vehicles and that sort of thing."

Red Storm is focusing on the weapons artwork, and it has an in-house authenticity department and connections with the local military. The studio has "tens of thousands of photos" of broken-down firearms.

"We've had manufacturers come in and literally disassemble the entire weapon all the way down to the nuts and bolts, and our guys are taking hi-res photos of those things," Red Storm Producer Tony Sturtzel says. "We probably have unparalleled access to these types of things because of our authenticity department and their focus on relationships. We're not ever gonna let the cat out of the bag on some of the relationships we have."

The Division is due out in 2014 for PC, PS4 and Xbox One, though that release window is reported to be "laughable," according to a Massive Entertainment team member.
[Image: Ubisoft]
In this article: Massive-Entertainment, microsoft, pc, playstation, ps4, Red-Storm, the-division, Ubisoft, ubisoft-red-storm, Ubisoft-Reflections, weapons, xbox-one
All products recommended by Engadget are selected by our editorial team, independent of our parent company. Some of our stories include affiliate links. If you buy something through one of these links, we may earn an affiliate commission.