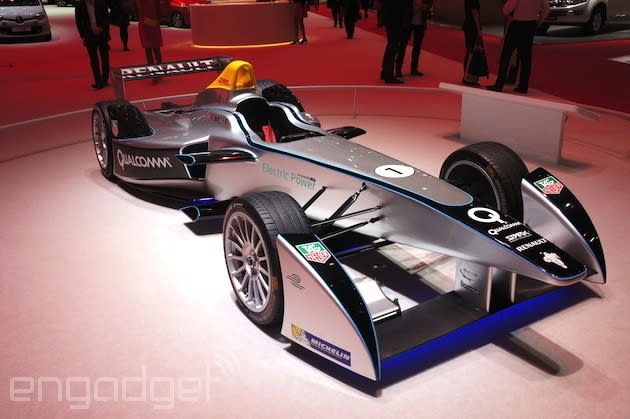 After it completed its successful test debut at France's La Ferté Gaucher circuit late last year, the Spark-Renault SRT_01E Formula E car now has a place to call home: the UK's Donington Park. Organizers of the Formula E Championship, the world's first fully electric race series, have confirmed that the first official team tests will be hosted at the circuit, which will also serve as home for all 10 of the race crews during its inaugural season. The first public tests will be spaced intermittently between July 4th and August 19th, three weeks before the series kicks off in Beijing on September 13th. They'll be truly public too, allowing fans to attend completely free of charge. Donington's state-of-the-art facility is set to open in early May with the first car deliveries arriving a few weeks later. Once teams get their hands on the 200kw (270bhp) single-seaters, it'll only be a couple of months until all of the cars run together for the first time.

In this article: donington, formula e, formulae, racing, tests, uk
All products recommended by Engadget are selected by our editorial team, independent of our parent company. Some of our stories include affiliate links. If you buy something through one of these links, we may earn an affiliate commission.