Lyft will run ‘continuous’ background checks on its drivers 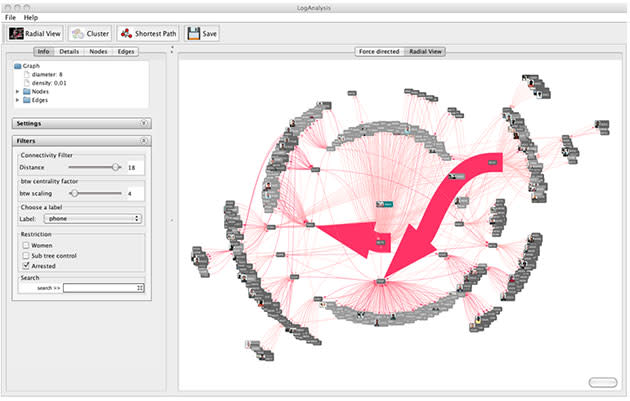 It's no surprise that law enforcement agencies use mobile phone records to investigate criminal activity, but a platform called LogAnalysis could facilitate some of the most sophisticated analysis for all that raw data. Developed by Emilio Ferrara and his team at Indiana University, the software uses call records and other info to map hierarchies within criminal organizations according to "social network theory." (Hint: Those who make the most calls are usually at the bottom, while those in charge tend to communicate the least.) And by automatically importing call records and removing ambiguous or redundant information, LogAnalysis streamlines the process of analyzing that data.

In a paper, Ferrara and other researchers describe how LogAnalysis processed call records for a group convicted of several robberies, drug trafficking and extortion. By clustering together calls based on the time and date, the software revealed which numbers traced back to gang members involved in a particular robbery or murder. The data also clumped calls together in 14 different subgroups, revealing individuals (or at least phone numbers) involved in specific crimes. As the MIT Technology Review points out, many of the researchers behind this paper are based in Sicily, so it's likely that some of the call data in this case comes from Italy. If that's true, we have a pretty good idea what criminal organization they're talking about here.

In this article: criminal, law enforcement, LogAnalysis, phone records, social network theory
All products recommended by Engadget are selected by our editorial team, independent of our parent company. Some of our stories include affiliate links. If you buy something through one of these links, we may earn an affiliate commission.