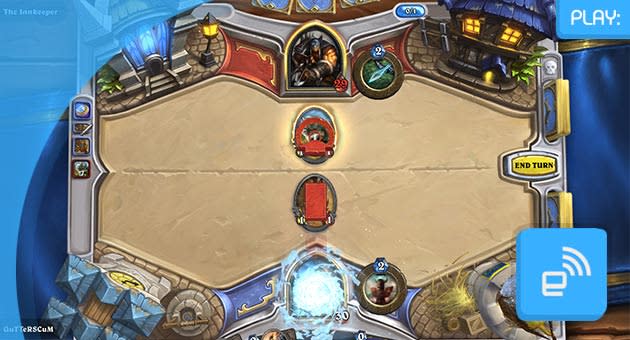 Blizzard's best-known for its RTS franchises and insanely popular MMORPG World of Warcraft, not to mention the Diablo series. With fans of the publisher's prior work kept sated and docile by sequels and expansions, Blizzard's turned some of its attention to other genres, like the early stage MOBA Heroes of the Storm, and the card-based game we're talking about here: Hearthstone. Hear the words "card game," and it's hard not to think of the deep mechanics of Magic: The Gathering that may appear inhospitable to newcomers, like starting to watch LOST half-way through the third series. One of Hearthstone's main strengths, however, is accessibility.

Basically, there are two types of cards, representing spells and minions that fight for you. Stronger cards -- like bigger, badder minions -- cost more resources (called mana) to play than lesser ones, and resources become more plentiful each turn, creating a nice crescendo effect as games naturally progress towards a conclusion. During duels, you also take on the persona of one of several hero characters from the Warcraft universe with a persistent, low-cost ability. Each hero starts with 30 health points, so lose those, and it's game over. That's all you really need to know to get going, and matches take roughly 5 to 10 minutes, too, giving it that pick-up-and-play vibe, making it a great time killer and easy to revisit. A single-player campaign is also in the works. It's simple to get your head around, and there's fun to be had right from the get-go, but it doesn't take long to understand specific strategies and card combinations to make you feel satisfied you're "getting it." You can take it as seriously as you want, though, from playing the stock, hero-specific decks against the computer or human opponents, to crafting a custom deck and attempting to climb the ranks. There's also an entertaining game type called Arena, where you build decks by choosing one card at a time from random sets of three, then battle others who've gone through the same process. To play a round of Arena though, which lasts until you lose three times, you need to spend in-game or real money (gasp!).

Yes, Hearthstone uses the dreaded free-to-play model, with extra card packs also costing cash, in-game or otherwise. We'd argue you shouldn't be put off by this, though. The easily achievable daily challenges keep this editor's Hearthstone account healthy enough, and you can earn cards for your collection by leveling up heroes and slaying foes in Arena mode. Many have gone out of their way to prove you don't need to pay to win, either, creating formidable strategic decks using only basic, free cards. The game's recently exited an extensive open beta period, meaning Blizzard's happy with the current state of card balance. And, further to the Windows and OS X releases, an iPad client has also started rolling out to select territories ahead of a wider launch, so now is as good a time as any to see if Hearthstone's your bag. And why not, it's free?

In this article: blizzard, cardgame, ccg, game, games, Hearthstone, PLAY, PLAYUK
All products recommended by Engadget are selected by our editorial team, independent of our parent company. Some of our stories include affiliate links. If you buy something through one of these links, we may earn an affiliate commission.