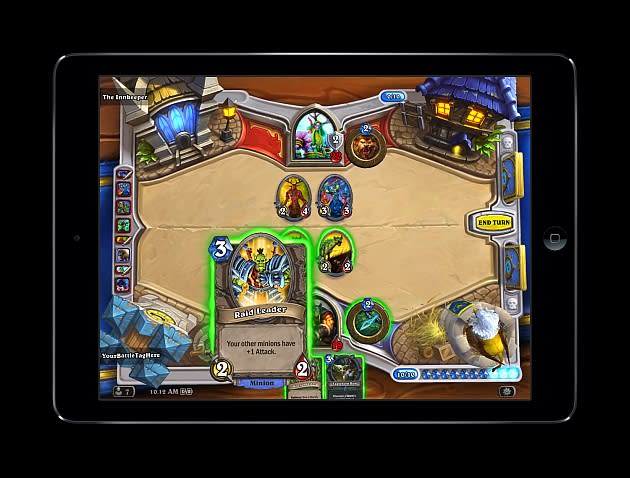 Were you hoping for a single-player campaign in Blizzard's Warcraft-themed card game, Hearthstone? Well, you're getting one. The outfit's announced Curse of Naxxramas at PAX East, and, in addition to fresh challenges and more than an entire deck's worth of shiny cards, there's a new Adventure mode en route for solo players. As Joystiq has noticed, Naxxramas also features a new game-board based on Warcraft's floating necropolis of the same name. The first area, subtly named Arachnid Quarter (gee, wonder what's lurking in there?), is free for everyone and will roll out simultaneously across iPad, Mac and PC sometime later this year. If you want to complete the expansion's other successive areas as they release, you'll have to buy-in either with in-game gold or your hard-earned meat-space ducats. Still not sure what the hype is about? Well, the game doesn't cost a thing, so there really isn't much risk in giving it a shot for yourself. It'd probably be a good idea to start practicing ahead of Naxxramas' ambiguous release date, anyhow.

In this article: Activision, Blizzard, CardGames, curseofnaxxramas, hearthstone, IOS, Mac, mobilepostcross, paxeast2014, PcGaming
All products recommended by Engadget are selected by our editorial team, independent of our parent company. Some of our stories include affiliate links. If you buy something through one of these links, we may earn an affiliate commission.