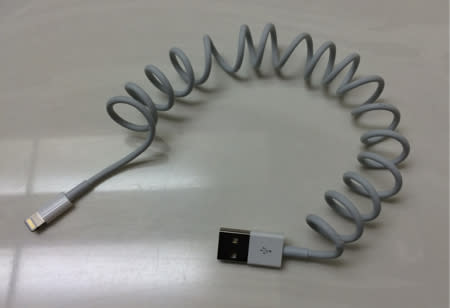 Apple's official iPhone and iPad charging cords are nothing special. Like any straight wires, they have a tendency to tangle in a bag and they don't look particularly neat laying across your desk or nightstand. But there's a way to give your official power cords some added style and functionality with just a pen, some tape, and a blowdryer. Here's your starting point. It's functional, but ugly and a bit of a pain to wrap up and take with you if you're in a hurry. Take any old pen you have lying around and wrap the cord around it, taping each end so it remains coiled without you holding it. Now, take a hairdryer and apply heat. This can be a bit tricky depending on the hairdryer you're using, but in general a good 90 seconds on each side should be sufficient. Don't melt the cord -- if you get it too hot, there's a good chance you'll melt the insides together and the cord may be rendered useless. I take no responsibility for you overcooking your fancy Apple cord. Let the cord cool down and then unwrap it from the pen. You now have a self-coiling cord!

In this article: accessories, coiled charging cord, coiling, cord, diy, how-to
All products recommended by Engadget are selected by our editorial team, independent of our parent company. Some of our stories include affiliate links. If you buy something through one of these links, we may earn an affiliate commission.