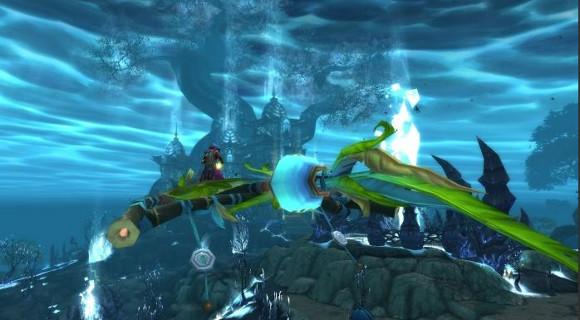 Community Manager Bashiok has posted on the official forums in an attempt to calm players' fears about the enforced dependence on flight-paths that will come with Warlords of Draenor.

Bashiok
We're going to be making sure flight paths and other forms of travel are quick and efficient, with a goal of getting you to the places you want to go. Flight paths in the past have always been "the scenic route", lazily listing from side to side and around waterfalls to the intended oohs-and-aahs of the transportee. The flight paths in Draenor are not going to be loop-de-loop sightseeing tours, and we're going to be looking to our beta testers to let us know if any are less than tip-top.
source
The key to his point here is the directness. Especially in Mists, flight paths were gratuitously looping and indirect. The Horde shrine from the PvP vendor, for example, does a series of completely arbitrary tours around the shrine before actually landing. Hopefully this will not be the case in Warlords.


But simply ensuring directness isn't enough. Flight paths also have to be plentiful so that, as Bashiok says, you can get to the places you want to go. Not somewhere near where you want to go that also requires you to cross a treacherous river full of particularly grumpy crocodiles, or a plain with huge packs of roving mobs. A certain amount of ground travel being required is of course, no problem. But if these flight paths are to satisfy player demand for air travel in lieu of being able to fly themselves, they need to be pretty darn convenient.

And honestly, if they are, I will be putting them to very good use. Flight paths are great in my book, because I can plonk my character on a kite, or a gryphon, or a wyvern and be ferried to somewhere near my eventual destination. Sure, they take longer, but in that time I can browse Twitter or write a post for WoW Insider on flight paths. I don't need to worry about flying off into treacherous waters, or colliding with a hill. When I land of course, I hop onto my flying mount and go kill some rares, and it's that part that needs to be minimized -- the distance between your landing and where you're headed.

I'm not going to say for a second that I'm completely happy with improved flight paths being a "replacement" for flying, but I'd love FPs to be better. And if they were, if Bashiok's implications turn out to be correct, then I'll be less annoyed by not flying myself.

In this article: bashiok, flight-paths, flying, flying-in-draenor
All products recommended by Engadget are selected by our editorial team, independent of our parent company. Some of our stories include affiliate links. If you buy something through one of these links, we may earn an affiliate commission.