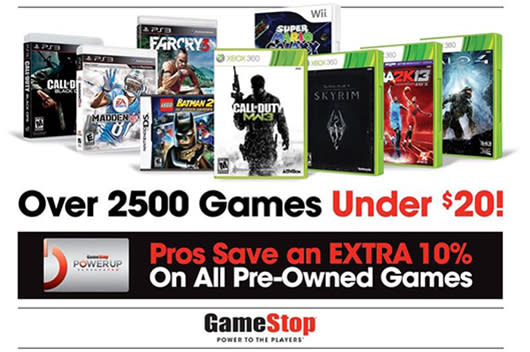 GameStop is celebrating spring with an Easter Weekend event, offering a "buy 2 get 1" on a select stock of used games. The promotion begins today at all GameStop retail locations across the United States and online. The deal comes with certain stipulations, however: only games priced under $20 are eligible, with the free title coming at equal or lesser value.

Though the promotion undoubtedly means PS4 and Xbox One titles are off the table, previous generation software is up for grabs. According to GameStop, the company "has recently reduced a large percentage of games from the Xbox 360 and PlayStation 3 libraries to $20 or less."

The promotion ends on Sunday, April 20.
[Image: GameStop]
In this article: Buy-2-get-1-free, Easter, GameStop, microsoft, nintendo, playstation, ps3, wii, xbox
All products recommended by Engadget are selected by our editorial team, independent of our parent company. Some of our stories include affiliate links. If you buy something through one of these links, we may earn an affiliate commission.