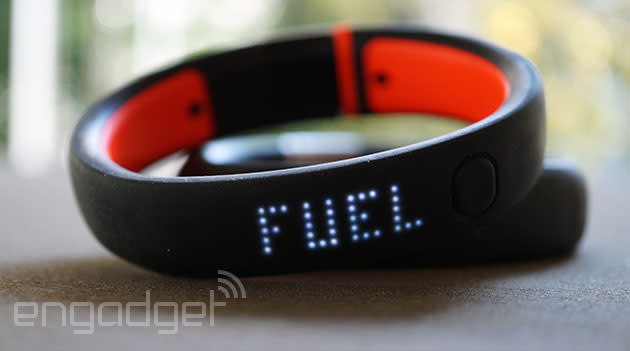 Just days after Nike announced the launch of its Fuel Lab location in San Francisco to enhance partnerships with other digital services for athletes, there's a report that it's fired much of the team behind its FuelBand wristwear. CNET reports that, according to a person familiar with the matter, as many as 55 people from its 70-member hardware team are being laid off, and plans for another version of the FuelBand to follow the SE have been shelved. All of this comes just as the wearables market is heating up, with products already arriving from Samsung, LG, Motorola, Pebble and more, while activity tracking integrated with phones is also becoming more popular. At the same time, not all of Nike's tech initiatives have worked out, and Nike+ has largely disappeared from its shoes in the last year.

A Nike spokesman confirmed to CNET a "small number of layoffs" as its "Digital Sports priorities evolve." (Update: In a statement, Nike says it "will continue to improve the Nike+ FuelBand App, launch new METALUXE colors, and we will sell and support the Nike+ FuelBand SE for the foreseeable future.")Given Nike's close relationship with Apple (Tim Cook is a member of Nike's board), one could wonder if the prospect of an upcoming wearable from Cupertino had a hand in swinging the apparel company's focus towards "simpler data-powered experiences" -- or they just spent all the money on tonight's sweet 3D projector intro to the Jordan Brand High School All-Star Game.

In this article: fuel, fuelband, hardware, nike, poll, wearable, wedgies
All products recommended by Engadget are selected by our editorial team, independent of our parent company. Some of our stories include affiliate links. If you buy something through one of these links, we may earn an affiliate commission.